The CWA girls have been very busy of late, with the AGM in October and adding some new and welcome additions to their executive.

Tanya Heaton has remained as president, Emma Smith will continue as secretary and the new treasurer is Marg Foster. Other welcome additions include Bev Spollen as the new cookery officer, Judy Chaffey as handicraft officer and Sally Neville as public relations. Sharon Thompson has agreed to go along with Tanya to group meetings and Marg Foster will accompany Tanya as official representatives to all state functions.

The CWA thank Sam Bermel for the work she did while in the treasurers position, sorting out all the little details with head office while renewing our branch. Tanya thanked everyone who has accepted a position and mentioned the State conference will be in Tamworth next year as one highlight of the year to come.

Tanya and Sharon joined 13 other branches at the Gwydir group AGM where, along with the usual activities of AGM’s, awards and trophies were presented. Bingara brought home the Barlow Trophy for the branch with the most new members and also came a close runner-up in June Sales (cash contributions to Group).

CWA group activities include representation to state regarding many important community matters which are then taken to our political leaders and decision makers.

So when branch members highlight local concerns they are followed through to a level where change can be achieved. This being their first year, CWA are thrilled to be supporting the branch activities and have the town to thank for their generous support of their street stall in June. 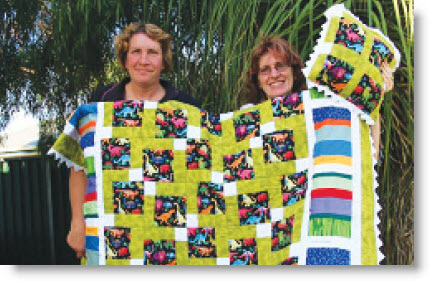 Marg Foster (quilter) and Tanya Heaton with the quilt made especially
for a sick child in town.

Recently, they were very pleased to present a quilt made by one of the CWA talented members to a sick child in town. Marg Foster gave her time and fabric to create a magnificent quilt and the young man was thrilled to have such a colourful, adventurous blanket for his bed.

An open invitation is extended to all ladies of Bingara and surrounding area to come along to the CWA Christmas celebration, Thursday, November 27.

CWA welcomes new additions The event will be starting later than the usual time hoping that women who have work commitments will be able to attend.

The monthly meeting will begin at 4.30pm followed by a casual gathering, sharing food and conversation. All members are encouraged to bring along a friend or two, a plate of finger food and a present to the value of $10 for a secret Santa if you want to be involved. The meeting will be, held at the Living Classroom on Cunningham St.