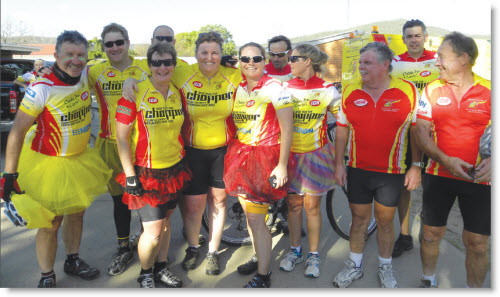 Some of the 48 riders taking part in the ‘Ride for the Chopper’ seven day Charity Mountain Bike Ride arriving at the Imperial Hotel on Tuesday afternoon.

The 48 riders and their 11 Support Crew left Tamworth on Friday morning.  From Tamworth the cyclists travelled to Glen Innes where they took to their bikes to cycle to Inverell.

On Monday, they rode to Delungra and back in a loop, and on Tuesday tackled the road to Bingara via Gum Flat and Copeton Dam. Riders told the Advocate they were battling a head wind from Keera into Bingara.

On Wednesday morning, the cyclists left at about 7am to ride to Barraba via Upper Horton, Bereen and Trevallyn.

By the time the riders finish in Tamworth on Friday, September 19, they will have riden over 640 km.

Some of the participants are into their 14th year of involvement in this ride. Sponsor Daniel Camilleri from the Calala Inn will be riding the trip and Carlo Cavalaro from Carlos IGA took a spin on a bike around the car park prior to the group’s departure from Tamworth.