Dangers and advantages of social media

For all the advancements that come with technology there can be a myriad of concerning side effects, but it is not all bad news. This point was illustrated at a workshop held at the Roxy last Thursday. 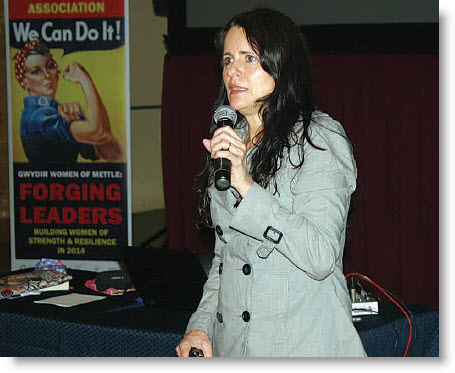 Advocate for female rights Melinda Tankard Reist offered helpful advice during her presentation at the Roxy on Thursday.

Australian writer, speaker, blogger, media commentator and mother Melinda Tankard Reist gave an at times confronting presentation on social media and popular culture.  Her aim is to increase awareness of issues pertaining to the sexualisation of young girls, but was also able to offer effective measures that can be taken to make a stand against such acts.

Ms Tankard Reist is an advocate for women and girls. She has started a company and has gained a strong following by successfully campaigning against and boycotting offensive and inappropriate products and images. She has appeared as a panelist on ABC’s Q & A and is a regular on different television and radio programs. She travels extensively sharing her message with school students and adults in a bid to help them make informed choices.

“Every year when I am asked to speak my target audience is getting younger and younger. The problems they are encountering seem to be starting at an earlier age,” Ms Tankard Reist said. “There are serious issues and we as a community need to be aware of those issues. We also need to tap into the power of the media and use it to our advantage. Once upon a time if there was something that I felt I needed to speak up about, I would have to take the time to write a letter, track down an address and get it away, but now with the Internet a message can be sent in a few moments. You can act a lot quicker and also spread the word to a greater audience in a very short amount of time.”

This presentation followed an Introduction to Social Media workshop held in the afternoon. Both were organised by the Upper Gwydir Landcare Association and part of the Gwydir Women of Metal Forging Leaders in 2014 events.