For Delungra boy Logan Taylor, while the last few weeks have not been the most pleasant, he certainly isn’t alone, as the wider community comes together to support his battle. Over the Christmas break, the family of four year old Logan was informed that a tumour had been found in his brain, and it was also in his spine.

Since news spread of Logan’s diagnosis, family and friends, and the wider community have come together to support the Taylor family, as they spend extended periods of time away from home while Logan undergoes treatment.

Rod Kent of Kaloona is one of a number of people organising a special day in Delungra to raise much needed funds for Logan, and is already blown away by the support of the community. “There have been so many donations, I really can’t believe how great everybody has been,” Mr Kent said. 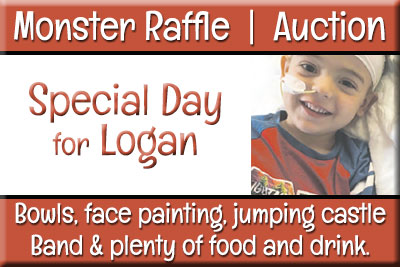 “We will be holding a monster raffle and also a huge auction. “We have had a welder donated, a chainsaw, just so much stuff, and even donations of money,” he said. The event is set to kick off at 3pm on Saturday, February 25, with the raffles and auctions taking place later in the afternoon.

“We really want the whole community to come out and get behind the Sarah, Robbie and the whole Taylor family,” Rod said. “Warialda, Delungra, Inverell… this day is for everyone,” he said.

“Come for a game of bowls, there will be face painting for the kids and a jumping castle. There will be a band playing and plenty of food and drink.” All money raised at the event will go directly to the Taylor family, in an effort to cover the costs of any treatment, living and travel expenses, and to cover time away from work.

So far, the wider community has gone above and beyond for Logan and his family, with donations flowing in to help in any way they can. A gofundme account set up less than a month ago has already seen $20,000 raised, with much more expected to come in following weeks.

The Warialda Preschool community is also contributing to the cause, with five Warialda ladies offering to ‘Go Red for Logan’. Tammy Hall, Sarah Butler, Elisha Hayes, Angie O’Dell and Natasha Price will all be dying their hair red if they each raise $500 before March 8.

The ladies have set up an account into which community members can deposit money to go toward the cause. To donate, money can be transferred to the account ‘Logan’s Trust’. BSB: 932 000. Account # 751777.

To donate items for the raffle or auction for next Saturday’s fundraiser, drop in to the Delungra Bowling Club, or call 02 6724 8204. All support is appreciated.