Road infrastructure, the behaviour of politicians and the Inland Rail were the main topics of discussion when Deputy Prime Minister, Michael McCormack, Member for Parkes and Assistant Trade Minister Mark Coulton, and State Member for Northern Tablelands and Minister for Tourism, Adam Marshall, plus about 70 local people got together at Croppa Creek on Thursday night.

The dinner, organised by the Warialda branch of the Nationals, was held at the Croppa Creek Bowling Club. 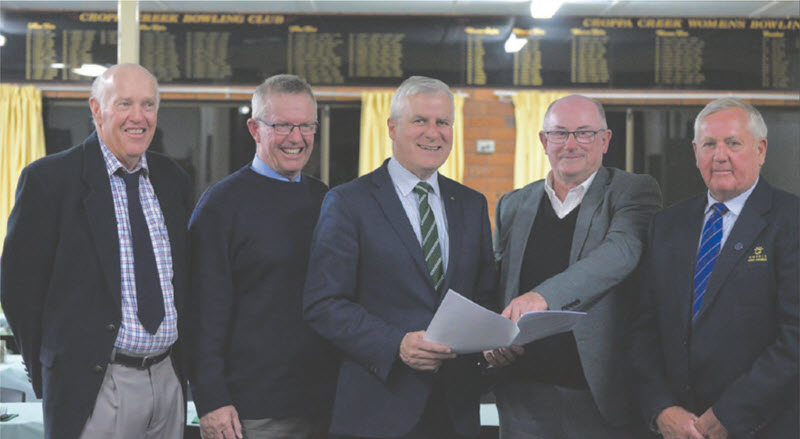 In his welcome to Mr. McCormack, Mr Coulton stressed that what people see on their news reports and what really happens in Canberra is quite different. “The press gallery would have you believe we go to Canberra and shout abuse at each other,” Mr. Coulton said. “We have actually achieved a lot of things.”

Mr. McCormack told the crowd that a couple of days after the leadership change the new Prime Minister, Scott Morrison, went to Indonesia, and Mr. McCormack in effect became the third Prime Minister in a week. “People branded Malcolm Turnbull as out of touch, but I found him to be pretty grounded, he owns property at Scone, and understands rural issues,” Mr. McCormack said.

As the Leader of the Nationals, he and his party colleagues had no say in who the Liberals chose as their leader, but he seemed quite happy with the choice of Scott Morrison. After the Liberals changed leaders, a new coalition agreement has to be drawn up, and Mr. McCormack said it took about two hours to come to an agreement.

“He asked what we wanted him to do. I said visit a drought community. ScoMo had already written down that was one of the first things he intended doing. “The Liberals have to win back the hearts and minds of voters,” he said.

He also spoke about how, some years ago, Mr. Morrison, whose electorate covers Cronulla, the scene of riots some years ago, and Labor Member, Jason Clare, whose electorates covers the area where the ‘other side’ of the riot, got together and took some of the young perpetrators on the Kakoda track, where the two sides were made to rely on each other, with a very positive result.

Mr. McCormack spoke highly of the work done by Member for Parkes, Mark Coulton “Trade is an important portfolio, and Mark, as Assistant Minister, knows how important trade is for regional electorates,” he said.

Mr. McCormack acknowledged concerns expressed about the Inland Rail project, in particular the location of the railway line. Before the function, Mr. McCormack and Mr. Coulton met with Gwydir Shire Mayor, John Coulton and General Manager, Max Eastcott, to discuss a range of issues, mainly roads. He acknowledged in his speech, a multi Council plan to work in partnership with the government plan put forward by Gwydir Council. “I like it when Councils like Gwydir come to me with solutions rather than problems,” he said.

At the meeting with Council, Mr. McCormack was able to give Cr. Coulton and Mr. Eastcott more information about the $1 million the government is giving to each Council to spend to create employment during the drought.