This time last year, three unassuming boys from Los Angeles slipped quietly into town. Like many anonymous heroes from countless cowboy classics, they gave little away on arrival. And little did Bingara know what to expect.

When they took to the stage in The Roxy with their Wild West adaptation of a timeless tale “Doc Faustus,” they unleashed their unforgettable comedic energy on the unsuspecting crowd. Those lucky enough to be in the audience can testify that they blew the lid off the town and left no doubt that they are a comic force to be reckoned with. 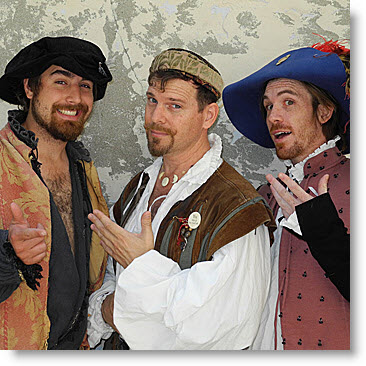 The Roxy is proud to hail the triumphant return of Sound & Fury, the outrageously funny comedians with a naughty night in the grim world of “Dirty Fairy Tales” on Thursday 21st March 2013.

“Dirty Fairy Tales” is the new show by the popular trio, coming to Bingara hot on the heels of their ground-breaking, sold-out run at the Adelaide International Fringe Festival, where they have become a Festival highlight.

Not only will Sound & Fury deliver their own version of three classic fairy tales, they will also perform a fully improvised tale based on suggestions from the audience!

“Dirty Fairy Tales” is everything you would expect from these accomplished vaudeville performers – a silly, naughty (and musical) parody of classic fairy tales full of slapstick and irreverent humour.   Virtually every moment is filled with equal amounts of sharp witticisms, hilarious vulgarity and deliciously bad jokes.

Their unique brand of infectious humour comes from their extraordinary ability to deliver a show that appears half-improvised and half-scripted that cleverly incorporates audience reactions into their lines.

The ability to appeal to a wide range of discerning humour is exceptionally rare. Here it is delivered in spades. Reviews of “Dirty Fairy Tales include:

Sound & Fury defy anyone not be find something amusing in their punchy, creative humour, comic timing and chemistry. Don’t miss them at The Roxy on Thursday 21st March.

It will contain COARSE LANGUAGE + SEXUAL REFERENCES THAT MAY BE OFFENSIVE TO SOME AUDIENCE MEMBERS.

And on Friday 12th April The Roxy is proud to present “A Night at the Opera” – a magical night of opera from the presenters of Opera in the Paddock featuring Peta Blyth, Lexi Hutton and friends.