Donation to Fitness Centre to go towards audio visual devices 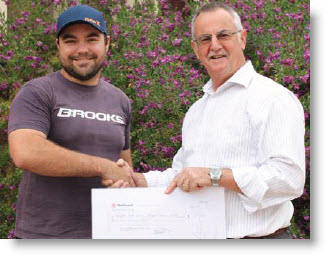 “We are extremely grateful for this donation,” he said.

“We plan for the money to go towards the installation of a flat screen TV, docking station and DVD player in the centre.”

[Graham Cutmore presented a $2000 cheque to Duncan Thain for the Bingara Fitness Centre on behalf of the Bingara Basketball Ass.]

With the first delivery of gym equipment recently installed and further cardio gear expected to arrive by the end of the month it is expected that the Fitness Centre will be officially opened by November.

With the goal of raising $10,000, the donation by the Basketball Association along with further donations collected by various fundraising events has seen just over $6,500 raised this year with the remaining funds hopefully to be raised with the next event which is being held October 24.

“The Fitness Centre Committee will be hosting a golf, tennis and bowls day followed by a camp oven dinner, entertainment and Sporting Memorabilia auction in conjunction with the Bingara Sporting Club,” Duncan said.

The event promises to be a great day of social sport followed by a night of entertainment. More details of the event will be revealed in coming weeks.