Ducks’ brand of jazz wins over the crowd

Locals and visitors were treated to fabulous entertainment on Sunday evening. One of Australia’s premier jazz bands, Galapagos Duck performed in Bingara for the first time at the pleasant surrounds of the town pool. 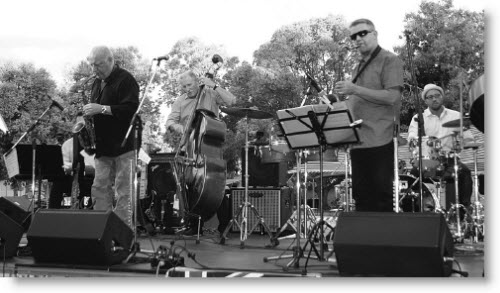 The 100-odd strong audience took the opportunity to bring nibbles and drinks as they took in an eclectic range of tunes under the stars.  “How lucky are we to have them here. It is an absolute privilege,” Gwydir Shire Council Special events committee member John Wearne said.

Credited for putting Australian jazz “on the map”, Galapagos Duck have won national and international awards and played throughout band has also played and recorded with Nina Simone and Ray Charles, James Morrison, Tommy Emmanuel, Don Burrows Winifred Atwell, Roger Frampton, The Australian Dance Theatre and the Australian Ballet. “Galapagous Duck are nothing less than a powerhouse,” Mr Wearne said.

Formed in 1969, quite a few in the crowd were taken back in time to when they performed as the long-term resident band at The Basement, Sydney’s iconic music venue and mecca for international entertainment.

The committee also put on a barbecue. Member Jenny Mead said it was a great opportunity for the town to see a band of such calibre.

“I think it is very important,” Jenny said. “It gives local people the chance to be exposed to wonderful music without having the issue of costs associated with travel and often, accommodation. It is very advantageous to the community.”