Racism can manifest in many ways, from subtle to outright, but one local 17-year old who has experienced both first hand is determined to create a greater awareness of the issue.

Ellen O’Rourke has just returned from a week-long youth summit in Canberra after winning the ABC’s Heywire for the New England North West area.

The competition allows young people to tell their stories in image and sound. Ellen was selected after submitting her video entitled “Taking a stand against racism.”

Growing up in Bingara, Ellen is proud of her Fijian/Anglo heritage. “We were the only Islander family, but it wasn’t until I was older and went to high school in Inverell when I became really aware of racism,” Ellen said.

“That was where I began to see it, hear it and feel it.” But Ellen channelled those negative incidents into something positive.

“Last week was absolutely amazing, it was such a good experience,” Ellen said.

“It is still kind of surreal to me, to have my voice and thoughts put out there and really being heard. I had no idea that this would all come about, and all because of a video I put on Facebook about racism.

“My teacher saw it and encouraged me to enter. Now I would like to encourage other young people to do the same. It has been a wonderful opportunity. I met lots of great people and we are hoping to keep in contact with each other in the future.”

During her time away Ellen met with political leaders in Parliament House. She was part of a team who had to pitch an idea of how to address racism in this region.

Ellen also went around the ABC office and also visited The War Memorial and the Australian National Gallery. 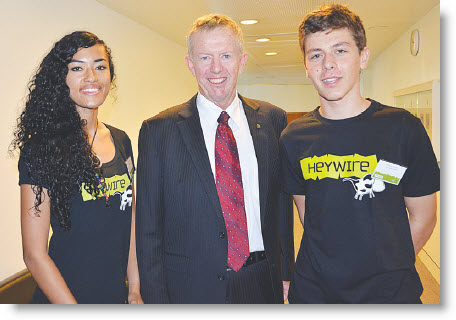 Member for Parkes, Mr Coulton met with Ellen, and also Stephen Sanders from Pilliga at the annual Heywire Morning Tea. (pictured above).

“There have been many successful entrants from the Parkes Electorate over the years. These are young people with ideas for our future who have shown their ability to articulate philosophies that are important to them,” said Mr Coulton.

“I very much enjoy the opportunity to meet winners of the Heywire competition when they come to Canberra to take part in the Heywire Youth Summit. It is also a great opportunity for our young people to share their experiences.”

“Ellen is a passionate advocate for ending racism, and I am sure that she has helped others by speaking out about her experiences.”

“Stephen’s winning entry was based on his sense of community and experiences following horrific bushfires at Coonabarabran.”

“I commend both Ellen and Stephen on their works and encourage them to continue to share their stories, ideas and opinions.”

Ellen is in Year 12 at Inverell High School. She is hoping to go to university but hasn’t quite pinned down what it is she wants to study just yet.

Winners attend the Heywire Regional Youth Summit in Canberra each year, where they take part in workshops to develop their communication and leadership skills.

Since it began in 1998, Heywire has helped more than 9000 young Australians have their stories heard and network with others from rural and regional Australia.