In a sometimes emotional ceremony, Year 12 students said goodbye to the school which some had attended for 13 years. 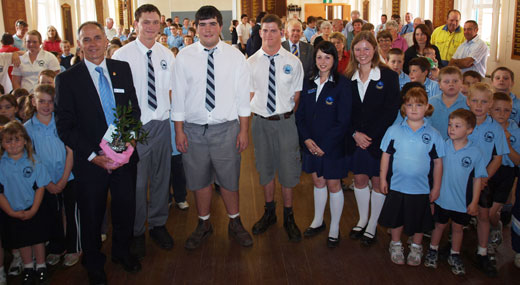 Five of the six students who will next month sit their Higher School Certificate exams were at the formal assembly held in their honour.

Speeches were a mixture of light hearted memories of the students’ time at Bingara Central, recognition of the students’ achievements and confidence that they will achieve success as they move to the next phase of their lives.

In his address to the Assembly, Principal Mark Vale noted that this is the second year Bingara Central has, in “the modern era” farewelled Year 12 students, following the decision by the school, four years ago, to commence Years 11 and 12.

He said that at Bingara, Central School, it is quality, not quantity of students that is important.  “I am exceedingly proud, just as their families are, I am sure, of them as a group of young citizens in our community,” Mr. Vale said.  “They have met, and in many cases exceeded, all of our expectations.  All have gained an authentic education to prepare them for life beyond school as adult members of our community.”

Mr. Vale’s enthusiasm was echoed by Mr. Bob Johnstone, speaking on behalf of the teaching staff.  He outlined the success already achieved by the students.

“Michael (Andrews) has undertaken a retail traineeship at McGregors for the past two years.

“At the conclusion of his HSC, Mitch (Anderson) will be undertaking an electrical apprenticeship.

“Ben (Bentley) played an important role in Joseph the musical, and maybe he’ll organise himself into something pertaining to a creative field.

“Kristen Heal’s future shines bright. This year she gained one of only 40 state Minister’s Awards for Excellence in student Achievement.,” Mr. Johnstone said.

School Captain, Kristen Heal, began her address by saying “It is not without a smile or two as we reflect upon the thirteen years of our schooling which have become a lifetime of memories. Bingara central has provided Mitchell, Michael, Ben, William Jade and me with not only an excellent education but a certain feeling of belonging.

“This year one of our English modules was ‘the concept of belonging’; I believe this school exemplifies the true concept of belonging. It’s taken 13 years but as leaders of the school we now look upon our fellow student body and see a sea of faces which remind us of our journey to this point and a connection with a small community which we can now call our family.

There may only be six of us left from a class of 20 or more, today we thank all our infants and primary school teachers for teaching us to count, to tie our shoelaces, to write, and most of all providing us with the foundation for our education.

“To the secondary teachers we thank you for not only helping us to pursue our interest but for also steering us through a difficult and often confusing period of our adolescent lives.”

On behalf ofthe students, Kristen thanked all parents for producing  “what stands before you today, six educated and independent people ready to take that step into ‘the real world’ and although you may have doubted it – we do love you.

“To all the teachers, parents and community members there’s nothing more we can say except thank you; for supporting and encouraging us to endeavour to strive to succeed.

“It is truly sad to say goodbye to something that has engulfed our lives for 13 years, a journey which has opened our eyes to new and exciting things. They say the world is our oyster and through what this education has provided us with we can now start the search for our pearl within this world.

“Myley Cyrus sings that there’s always going to be another mountain that we are going to want to move-  but it is not always about what’s on the other side…, it’s about the climb.

“We have reached the top of the mountain ….. but it was the climb that has made us who we are today.

During her speech, Kristen became emotional and was, for a short time, unable to continue.

It was classmate, Will Johnstone, who, in a display of chivalry which drew applause from the audience, put his arm around Kristen’s shoulder, encouraging her to complete her speech.