Entries up but catches down at Easterfish

The low level of water in the Gwydir River, and the amount of weed in the river, have been blamed as the reason for not many fish being caught in the Bingara Anglers Club annual Easterfish competition. Entries were up on last year, with 117 registered.

Anglers Club President, Andy Calloway, thanked Gwydir Shire, Sportsman’s Hotel, Meat on Maitland, the Bingara RSL Club, Brian Riley, Graham Rampling form Five Star Electrical, John and Bec Walters, and Landmark Barraba for their support for the competition. One anglers explained that because the river is so low, and there is a lot of weed, shrimps are there in great numbers providing competition for fish.

Clint Wilson, fishing with a family group at Copeton Dam caught just one undersized cod during the competition. He did catch one legal sized cod, but that was before the competition started.

Young angler, Marshall Bond was disappointed to catch only ‘Two turtles and a carp”.

Keen participant, Eddy Jobson, who has been coming to Bingara for Easterfi sh for 12 years, had to buy a new car to make the trip. He also caught nothing during the weekend, but had an enjoyable time. 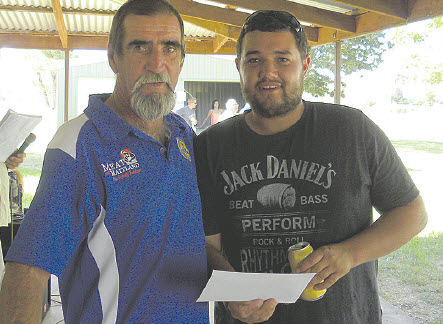 Linden Missen from Boggabilla, with Anglers Club committeeman, Mick Walton, was the most successful entrant in the Easterfish competition, catching the biggest fish, a yellowbelly. Altogether Linden caught 10 catfish and 15 yellowbelly to take out the Lee Baldock trophy.

Biggest and most carp: Riley Bienkie who caught four.