The Living Classroom (TLC) in Bingara is about to see a new project that will excite many Gwydir Shire residents and reach out to rural people across Australia. The Aussie Farm Dam Make-over is a concept that has been developed by two students from the Queensland University of Technology (QUT). 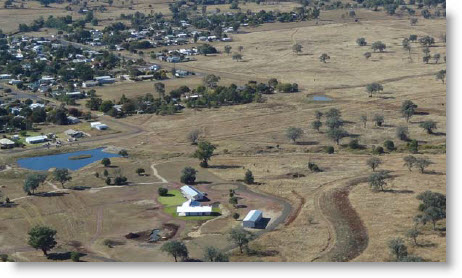 Massive plans to enhance The Great Lake pictured above in left hand corner, are underway.

Debbie Turner and Emily Colling produced the Aussie Dam Makeover as their third year project in Landscape Architecture. Under the guidance of John Mongard, who has provided most of the initial plans for TLC, the students researched and designed the concept to be applied to the feature dam at TLC. The feature dam, that Mongard has termed “The Great Lake”, is a 6 megalitre, water storage at the end of a 2 kilometre water capture bank and swale system.

The Great Lake was designed and shaped at the start of TLC project to provide a site ready for a number of varied applications.

Turner and Colling’s research showed that the traditional Australian farm dam usually fails to deliver. They saw that the objective of reliable and clean water for stock was often defeated by high evaporation, high infiltration and stock pollution of the water. This makes the typical farm dam unreliable and counterproductive.

Although water is captured, its quality and utility are poor, and this failure begins well before the onset of drought.

The student’s response was to suggest the Aussie Farm Dam Make-over.

Key elements in their design were to suggest that farm dams be; deeper, with less surface area to volume; crenelated, with a greatly increased ‘edge factor’; ecologically enhanced with strategic plantings of vegetation both within the dam, along its edges and adjoining it; and the introduction of other features to both enhance the dam’s aesthetics and increase its economic and environmental potential.

The design work of the students greatly impressed their tutors and several Bingara community members, so much so that it was proposed that grant funds be sought to take the project ‘off the page’, from a plan to a reality. Frances Young from Northern Slopes Landcare (NSLC), Glen Pereira from Gwydir Shire Council (GSC) and Rick Hutton and Garry McDouall, both from Bingara and District VISION 20/20 (V2020), met to discuss this prospect.

An application was put to North West Local Land Services (NWLLS) for funding to advance the project. The application was successful and more than $50,000 has been allocated to the project from NWLLS, with supplementary funding from GSC, QUT and V2020.

The application also requires engagement with, and a presentation to the community. This is being put together and will take place in the Roxy Theatre in late May/early June. At that time, input will be sought from community members for other ideas to add to the Aussie Farm Dam Make-over, and for support as “In kind” volunteer work from the local community.  Community engagement and volunteerism are important aspects of the application.

In the meantime, earthworks and the initial structural work will be carried out at the Great Lake site in the north eastern sector of TLC commencing in May. Community members are welcome to take a stroll on the site, and view the initial concept plans, on display in the Bingara Visitor Information Centre.

This is an exciting project. It is possibly unique in Australia, and has implications for rural people across the globe.

Recent announcements from the Federal Budget for tax deductions when spending on water infrastructure, and the suggestion from the Bureau of Meteorology that at an El Nino event may trigger the onset of another drought in Eastern Australia this year, makes the Aussie Farm Dam Makeover, even more timely.

It is intended that this Project will enhance The Living Classroom as a visitor destination, and as a place of learning. It has the potential to boost the economic prospects for Bingara and Gwydir Shire.