BingaraLatest NewsGeneralFascinating mix of history, nature and art at exhibition

Fascinating mix of history, nature and art at exhibition

A beautifully kept and meticulously documented collection of eggs collected from the Gineroi area, paintings of the birds featured and stories about the man who collected the eggs 80 years ago combined at the opening of an exhibition at the Bingara Historical Museum on Saturday afternoon.

The exhibition was opened by John Whitfeld, nephew of the late Jack Whitfeld who put the egg collection together before 1930.  John’s cousin Helen McFarland was also in attendance with her husband Terry and three children. 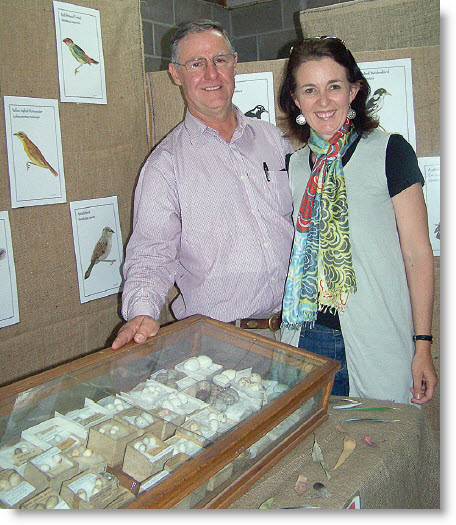 Cousins, John Whitfeld and Helen McFarland with the collection of 35 clutches of eggs collected by their uncle, Jack Whitfeld.

To compliment the collection, local artist and Historical Society member, Diana Kazanili, painted each of the birds featured.

Bingara Central School years 7 and 8 also played a part, with their teacher Brooke Marshall and students preparing dioramas of the bird habitats.

In his address, Mr. Whitfeld told of his uncle’s life and his love of the land and nature.
He urged the audience to think about an area which needs looking after. “I am talking about someone who took the same approach 80 years ago,” he said.

Jack Whitfeld was born in 1904, the eldest of three brothers.

In the 1920s, John Whitfeld said, his uncle took a stance on a piece of land which was set aside to be preserved.

“It was a time of the axe, before  chainsaws and bulldozers, they were days of sweat. (Jack) recognised the need to preserve some land for regeneration, and also collected, labelled and put on display eggs from birds around the area at the time.

“We can look and say which birds are now prevalent or under threat. For example, the robin red breast which used to bounce around in our garden is now hard to find.”

Jack Whitfeld was born at Moore Park, Armidale, and lived at “The Grove”, Tingha, his father, Albert’s 8,000 acre property.

He attended boarding school in Sydney, where he represented his school playing in the First XV rugby team.

During his time at Tingha he developed a great respect for all animals.

Moving to Gineroi, he became an excellent judge of cattle and horses, and also ran a successful Romney Marsh sheep stud, Angus stud, and bred horses.

When war broke out, Jack attempted to join the AIF, but due to a knee injury, was at first turned down. When he did join, he quickly rose to the rank of Captain.

He was given the responsibility of finding horses for the Duke of Gloucester, and then was attached to the US Army, again finding horses. Jack Whitfeld died of cancer on Christmas Day, 1945.

John Whitfeld described his uncle’s egg collection as valuable, not just now, but for future generations. The display at the Bingara Museum is the first time the eggs have been on public display.