Erik and Noelene Ozols owners of the Imperial Hotel were in Goulburn on Friday for their daughter, Fiona’s Attestation Parade at the Goulburn Police Academy. 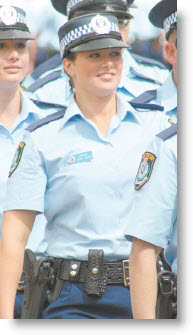 Fiona was one of over 500 recruits welcomed by Minister for Police and Emergency Services, Michael Gallacher, and has been allocated to the Richmond Patrol, stationed at Casino.

Fiona attended Bingara Central School, and completed her schooling at Gleenie, Toowoomba. She went on to study Forensic Science at the University of Western Sydney, graduating in 2010.

Fiona is following in the footsteps of her father, Erik, who left the police force before coming to Bingara. Erik met up with his former boss, Detective Sergeant Clarrie Lemmey, who led the pipe band at the parade. “ He was my boss at Marrickville, and he also taught (Bingara boy) Tom Hosegood at Scots,” Erik said.