Off the back an overwhelmingly successful two-week rescue operation at Menindee, in the State’s far west, specialist State Government teams have teamed up with volunteers from The Bingara Anglers Club to start a second fish rescue effort in the Gwydir and Horton Rivers.

Member for Northern Tablelands and Minister for Agriculture Adam Marshall joined the team and members of the Club, at the beginning of the State’s first rescue operation to move key native fish species to a volunteer-run hatchery, with the help of a local recreational fishing club.

“I haven’t minced my words when it comes to just how serious a situation we’re facing this summer, we are in the eye of the storm and I’m making sure we’re in the best position possible to face this unprecedented disaster,” Mr Marshall said. “Our own region will not be immune from fish kills this summer. The Horton and Gwydir Rivers have been identified at hotspots, where fish kills events are extremely likely, hence this rescue operation getting underway here this week. 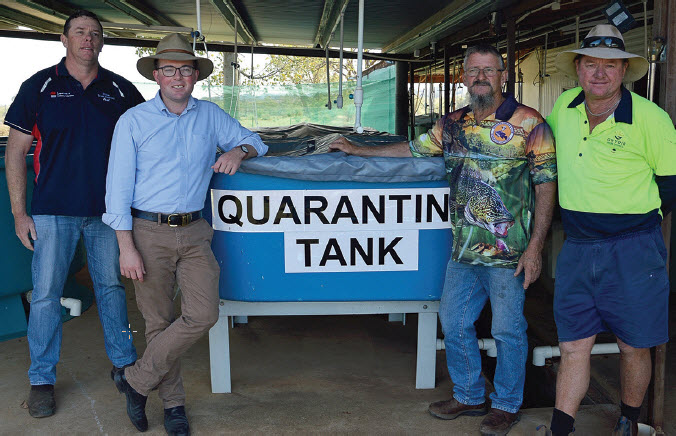 “We’re harnessing the knowledge of local recreational fishers, who will work side-by-side our specialist scientists, to find pools in the Gwydir and Horton Rivers most likely to dry up this summer.  We need all hands on deck to make sure we save as many fish as possible, and that’s exactly what we’re going to have here in Bingara.”

Using vehicles fitted out with temperature and oxygen controlled tanks, fish will be moved to the volunteer- run Bingara Hatchery, where they will be housed in tanks and bred to help restock our rivers when flows return to normal. Almost 800 fish, including Murray Cod, Golden Perch and Silver Perch, were rescued in a two-week operation in Menindee, and Mr Marshall is confident of seeing these excellent results replicated across the state.

“There’ll be more severe fish death events this summer and there’s not a lot we can do to prevent it, but we’re getting on the front foot while we still have a chance,” he said. “Through this unprecedented fish rescue operation – the largest our State has ever seen – teams will travel far and wide providing a lifeline for native species.

Gwydir Shire Council has given four of its employees, who are all members of the Bingara Anglers Club, leave with full pay this week so that they can assist with the operation.

“Gwydir Shire Council recognises the value of preserving local native fish species and their genetics and I thank and congratulate council for allowing their staff to help this week,” Mr Marshall said. “Together with DPI staff, hundreds of local fish will be rescued from dwindling water pools and stored at the hatchery where they will be used for breeding programs.”

President of the Bingara Anglers Club, Stuart Lanagan, told The Gwydir News on Monday night that so far seven Murray cod have been taken to the hatchery. There, they are placed in quarantine and purged so they do not bring any disease into the hatchery. From there they are graded according to size and will be kept in the breeding ponds at the hatchery. Unfortunately, the Murray cod which the hatchery committee were using for breeding were taken by pelicans. Plans are in place to run wires in a zig zag pattern over the ponds so that the pelicans cannot dive into the ponds and take the fish.

Mr. Lanagan said he had taken a quad bike along much of the Horton River bed, and described the river as being in the worst condition he has ever seen. This second rescue operation is part of the NSW Government’s $10 million plan to create a modern day ‘Noah’s Ark’ to ensure the survival of the State’s key native fish species from ecological disaster. 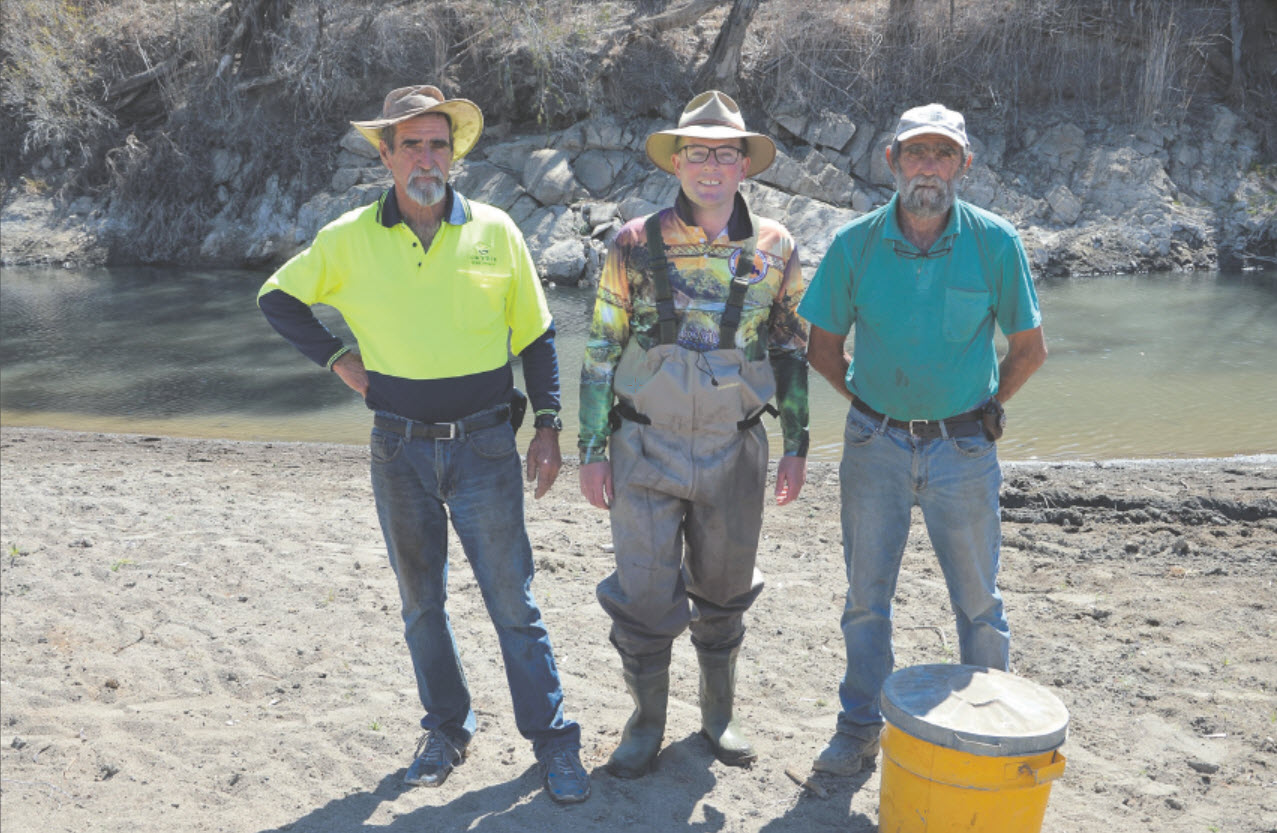 Mick, left, and Peter Walton with Northern Tablelands MP Adam Marshall at one of the Horton River’s water pools about to rescue some fish.