Former Gwydir resident, Paulette Hayes, has found herself in the spotlight recently after her artwork, ‘CONTROL. ABUSE. KILL. She’ll Be Right Mate.’, was highlighted across the ABC network. First broadcast on ABC North Coast radio, the video and audio of Paulette describing her work has since appeared across Australian TV, radio and print.

“So much of the media attention focuses on the man; with the headlines and the court cases,” says Paulette. “I think everyone needs to be remembered. I hope it gives some awareness to domestic abuse and helps people in that situation,” said Paulette.

“The whole aim was a memorial for those women in 2013 because I had been getting the details from the ‘Counting Dead Women” website. The cases were sorted; we knew what had happened, who killed them, and I could find the story.”

The artwork has three parts. ‘Remembering our Sisters‘ – 79 paper houses in memory of all the women killed in Australia in 2013. The concrete houses ‘ foundations‘ – the perpetrators and the third – the blue singlets ‘Wife Beater‘ is about the effect society (media, upbringing) has on the way women are treated. 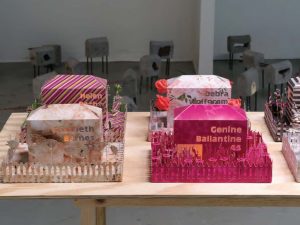 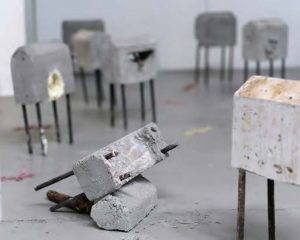 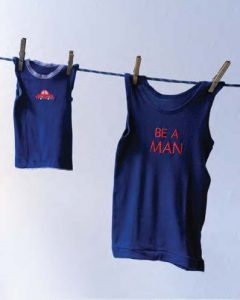 Paulette initially chose to work with feminine paper; the softness and beauty of which is a stark contrast to the horrific deaths these women suffered. She describes the meaning her chosen material of paper carries. “I came across the house, and this scrap-booking paper because, as a piece it stands and it’s strong and it holds together. But the thing about paper is very it’s fragile.”

Adding to the work felt necessary for Paulette after some men were noticed walking past the fragile work.

The slang term ‘wife-beater’ for a singlet worn by a man is quite confronting and the image stands brutally against the delicate paper houses symbolising the deaths. Most symbolic is the depiction of the singlets across a size range from 000 up, is that the behaviour and imprint men have on their sons; that the behaviour is modelled and learned.

“This began with Eurydice Dixon, from Melbourne. That happened and I made a small, embroidered textile sculpture to Eurydice. I have always done works that involve social justice.”

Creating the work was a labour of love with Paulette making five houses per week until she was done, before moving on to the concrete houses. “I really had to work at it,” she said.

Paulette Hayes has been contacted by media from across the world since the audio story first played on ABC radio last week. By Thursday the video had been viewed 298,000 times. There has also been some contact by several relatives of the women who are portrayed in the works.

To view Paulette’s full work please visit her website: www.paulette-hayes.com/index.html, where photographs taken by Paulette, as well as Cherie Winter, are available to view.