A man who started his football career with in the late 1980s as a member of the Bingara Minor League Club played his 150th League game for Kambalda Football Club in May. A huge crowd turned out to see one of the club’s “favourite sons” Steven Simpson reach that milestone. Among the crowd were Steven’s grandparents, Maureen and Ted Craddock of Bingara. 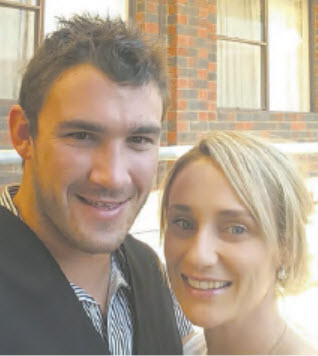 Steven Simpson with his wife Elise.

According to the club, “Simmo” is just the fifth player in the clubs history to achieve the 150 game milestone, a testament to the significance of this achievement. When he moved with his parents Peter and Janelle, and sister Olivia, to Western Australia, the young Bingara Minor League player found that football was Aussie Rules.

Steven started his journey with the Kambalda Football Club in the U11’s in 1999 and has progressed through the junior system and into senior football. In 2008, he coached the Kambalda U14’s junior side to a premiership whilst still playing Colts and League Football. He went on that season to play two Colts games with Subiaco and was named Kambalda rookie of the year.

During his career Steven has also coached the U16’s team, represented the GFL at three Colts Landmark Carnivals where he was a member of one victorious carnival taking out the Colts title. He would also represent the GFL in three senior Landmark Carnivals and was named joint captain with Cale Delbridge in the GFL’s venture back into rep footy back in 2014. He has won the leading goal kicker award in both the Colts and League.

Steven was awarded the Peter Ding medal in 2016 and 2017 as the League side best and fairest and has finished runner up on two occasions and third on another. Steven’s league debut came in Round 3 on Saturday 13th April 2008 against Boulder City at Kambalda Oval. He celebrated that game with a 10 point win. He won his next two games against Railways and Kangas.

Steven went on to play 10 league games in his debut season for 5 wins and 5 losses, but unfortunately missed selection in the senior team for the league finals series. The Colts team went out in straight sets following losses to Railways and Kangas in the 2nd semi and preliminary final and Steven would go on to play in the losing Reserves Grand Final.

Since his debut in 2008, Steven has gone on to play in 149 games and kicked 96 goals. His win-loss ratio is 25 wins and 124 losses. He has played in one final back in 2013 which was a losing first semi final to Mines. Now into his 12th season, Steven has gone through all the tough times and ridden every bump and every bruise with hundreds of players across that period. There have been three full seasons where the club was winless, a further three full seasons where they won just one game and another two where they won just two.

Despite all the pain and the tough times on the field, Steven has been a constant and always poured his heart and soul into the club. He was pivotal in the 2016-17 seasons in getting the club through one of its hardest and leanest periods by putting in countless hours behind the scenes with his wife Elise and fellow committee members to help keep the club alive. He has been a player, a junior coach, a junior premiership coach, a junior umpire, a committee member, a Vice President and since the 2015 season he has been the captain of the side for 63 games and counting.

Now aged 28, Steven is loved by all at the club and respected and admired by many others within the Goldfields Football League “If there is one player in our club or the GFL who deserves some on field success and reward for the many years of loyal commitment to our club, it’s Steven Simpson. And it’s something the club is working overtime to do with a solid start to the season so far,” a club official said.