Former resident of Bingara, Don Capel, has been elected to the Oberon Shire Council. 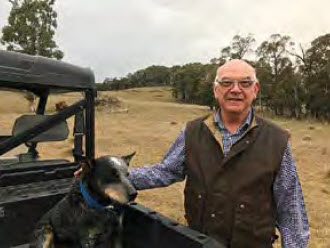 Former Bingara locals, Don Capel and his dog, Dougal, at their Oberon property.

Elections were held on September 9 following an extended battle with the State Government to amalgamate Oberon with Bathurst, which the government lost.

Don has always been involved with the community, being Chairman of the Moree Rural Lands Protection Board for six years, Chairman and committee member of Double B Beef for a number of years, inaugural member of Rocky Creek Landcare and Deputy Captain of the Rocky Creek bushfire brigade.

Now that Don lives a little closer to town, he decided to do his bit for his current community by standing for Oberon Council. He is one of the nine councillors elected.