Just over a year and a half ago, a small group of individuals decided to try to bring communication and leadership skill building to the communities of Manilla, Barraba and Bingara. Three months later, the first meeting of the group was held at the Playhouse Hotel in Barraba in late July 2014. 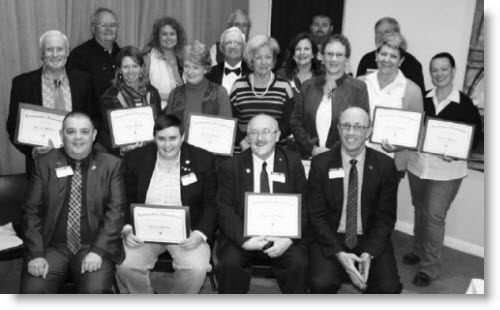 Since that time, the club has welcomed community members from across the Manilla, Barraba and Bingara communities through their doors. In June this year, the club had 26 members, enough to charter the club, and so they submitted an application to Toastmasters International, which was accepted.

David handed over the club’s Official Certificate of Charter, as well as the Club’s Banner to the current President Terry Austin.

I am very proud to accept the certificate and banner on behalf of all the members of the Fossickers Way Toastmasters Club,” said Terry.  “It is the culmination of many hours of hard work by all members that got us to this point.”

Fossickers Way Toastmasters Club meets on the 2nd and 4th Tuesdays of each month at 7 for 7:15pm, with the venue alternating between the communities of Manilla, Barraba and Bingara. Membership is open to anyone aged 18 years and over who would like to be able to practise public speaking in a warm, friendly and supportive environment. The only essentials for membership are a sense of humour, a pen and paper.

Toastmasters is a learn-by-doing organisation, and members progress through the program at their own pace. You are given access to practical resources, to guide you through the learning of new skills. These resources include manuals, which guide members through the basic building blocks good speeches, one assignment at a time. You can learn leadership skills, such as time management, planning and delegation, team building and motivation, by performing specific roles at meetings.

If you would like to know more about Fossickers Way Toastmasters Club, or how to join them at a meeting
Tel: Alison on 0417 282 773 or email fosswaytm@yahoo.com.au.