Full house at the Roxy to hear Lexi sing

The theatre was nearly full well before the starting time, which was an indication of the general desire for “good seats” for the concert. 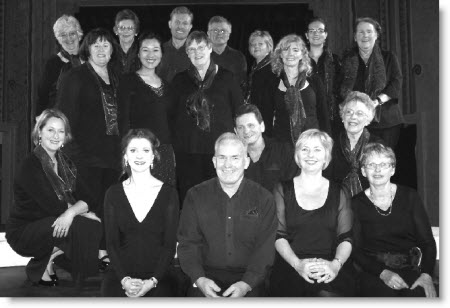 Lexi Hutton, front left, with pianist Li Ling Chen directly behind her, with members of Narrabri group, Harmony Inc. after the concert on Sunday.

President of the North West Theatre Company, John Wearne told the Advocate that the company was “totally thrilled to have been able to bring music of that standard to Bingara.” Mr Wearne, who acted as Master of Ceremonies for the concert, took the opportunity to talk to Lexi on stage about her singing successes in England and Europe, as well as interviewing her about her musical career, which has seen some wonderful accolades.

In July, Lexi competed at the 30th International Hans Gabor Belvedere Singing Competition in Vienna, Austria in which she gained second place in the operetta section. Lexi is returning to England in September to perform at the International Aldeburgh Festival in the Britten-Pears Young Artist Program, an event that has launched many artists’ careers. She has also been selected to perform as soloist with the Royal Philharmonic Orchestra in London in November.

Mr Wearne’s questions allowed the audience to not only hear about Lexi’s achievements, but also to get to know her a little. Mr Wearne also talked to Harmony Inc’s conductor and musician, Julie Fawcett about the group, which has now performed at the Roxy on two occasions for the North West Theatre Company. The group has been performing for many years in the region, with four inaugural members still singing with the group.

The audience generously thanked the pianist, Li Ling Chen at the end of the concert with a hearty ovation. Ms Chen, who came from Taiwan to Australia at the age of 15, is an accomplished musician, who has toured internationally and recorded with many orchestras both in Australia and in Europe. She is married to pianist and school teacher, Matthew Minter and lives on a property near Manilla. Ms Chen has been involved with Peta and Bill Blyth’s Opera NSW for a number of years. She teaches oboe and bassoon at both the Tamworth and New England Conservatorium of Music in Armidale and has recently returned from 15 months teaching and performing in Taiwan.

The concert, which was staged by the North West Theatre Company, was enthusiastically received by the audience which energetically applauded all the renditions. At Lexi’s request, a donation from the proceeds of the concert will go to Touriandi Lodge, where Lexi’s grandparents, Harry and Ketha Fay are currently residing.