On Saturday February 26 the North West Theatre Company hosted their Movies, Music and Mayhem 2 Trivia Night at the Roxy Theatre in Bingara.

Sixty people attended and were swept away with the nostalgia and rhythms of great films and wonderful tunes as well as a sprinkling of general knowledge.

Quiz mistress Ros Moulton kept the questions flowing while young wiz on the computer, Tom Southwell put into action the skills he had acquired under the supervision of Bingara Central School teacher and NWTC Committee member Jon Alliston, to fill the Roxy with music and the screen with film clips.

The winning team was the “Drowning Trout” comprising Bruce and Georgie Butler, Donna Walton, Henry Young, Jessica Russell-Davies and Nick Hutton with a total score of 99.25 out of a possible 130. 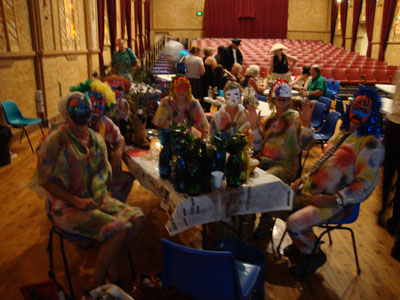 The Mayhem-orroids team with their  Best Decorated Table.

The highlight of the night were the members of the “Mayhem-orroids” team who, though coming last in the Trivia, swept the field in the best Table Decoration Prize with their sparkling arrangement of painted costumes, masks, flower display and assorted shoes and boots to drink from. They even had themselves piped into and out of the Roxy by friend of Geoff and Barb Leach, Alan visiting with wife Linda from Spain.