Fun & Learning for children at the Bingara Show

Show was an absolute Sirkus
Children of Bingara were well entertained at the 2014 Bingara Show. 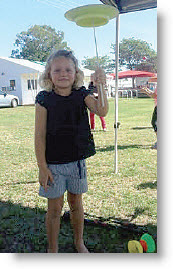 Slippry Sirkus hosted three workshops at the Show. It was a terrific event for the kids – they gained skills and confidence in their ability to perform. These workshops also helped them gain the belief they can do anything if you set your mind to it.

The workshops were thoroughly enjoyed by all 31 participants who attended.

Face painting popular at the Show
As the photographs show, the artists from the Bingara Pre-School were kept busy at the face-painting station at the 2014 Bingara Show.

There were some very interesting little faces getting around the showground, ranging from some very pretty flowers through to halloween pumpkins and spider man and even some scary snakes.

Money raised from the face-painting goes towards running of the Preschool.