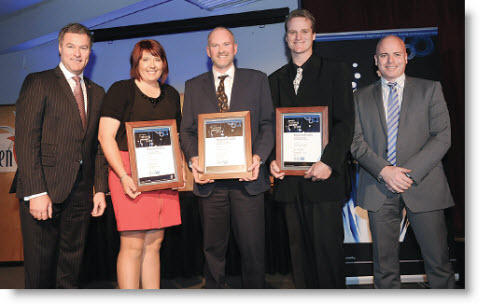 Owen was nominated by the Southern Queensland Institute of TAFE for his commitment to quality and excellence throughout his studies in enrolled nursing. The Institute had previously recognized Owen’s efforts at his March graduation, with the Academic Award of Excellence in Nursing Studies and the Bob Walker Memorial Trophy for Outstanding Achievement across all faculties.

The award was won by Frances Hayden who is studying a Diploma of Agriculture through the University of Queensland.

The selection criteria and process for the recent Queensland Training Awards is both an extensive and exhaustive one.

From an initial 600 nominations from across the state of Queensland, Owen was selected as one of twenty four finalists for the Darling Downs South West Region and one of three in his own nominated category of Vocational Student of the Year.

Queensland’s Minister for Education, Training and Employment, John-Paul Langbroek MP, was on hand to congratulate all the finalists and to commend them on their outstanding contributions to both their professions and the Darling Downs Region.

As a lead up to the awards ceremony on Saturday night, August 3, Owen was interviewed by ABC Radio Toowoomba and featured in the Toowoomba Mail newspaper where he discussed the Queensland Training Award process.

He was also asked about his experiences as a newly graduated nurse and his commitment to further study, undertaking the Bachelor of Nursing degree at the University of Southern Queensland.

Owen attended the red carpet gala event with his partner Ed and his mother Lucy.