Glenn settles into life at the Bingara pool

Patrons of the Bingara War Memorial Pool will see a familiar face this season. Glenn Wade, the new manager, is Bingara born and bred. A keen swimmer, Glenn holds a Lifeguard licence.

He had the full swimming season last summer at the Tamworth City pool and enjoyed it immensely. Thus, when the Bingara pool became available, Glenn was delighted to take it up, as it means he can now stay at home, as well as do something that he thoroughly enjoys. 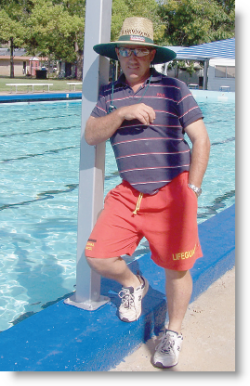 Glenn, a butcher by trade, is still keeping his hand in by teaching TAFE in the North West area, but will be spending most of his time at the pool. To be back at his home base is “Great,” Glenn said.

The opening hours at the pool are 6 am to 8 am, then 11 am till 6 pm for this month, and then from next month closing hours will be 7 pm. Glenn is hoping to build up the numbers of lap swimmers in the early mornings. It’s a good opportunity for working people to be able to use the pool, as well as anyone who is keen on training.

The canteen on site is up and working. “At this time”, Glenn said, “I have no special activities planned, but as the summer progresses we’ll be on the lookout. Now, I’m just getting my feet wet!”

In January, Glenn’s daughter, Ellie, who is Oz Swim trained, will be working at the pool teaching the Royal Life Saving “Swim and Survive”.  At present, Ellie teaches swimming at The Armidale School while attending the University of New England.

The Royal Life Saving has put out a flyer. In part it says “Swim and Survive is a comprehensive swimming and safety initiative that seeks to increase the swimming and water safety skills of all Australian children.”

It goes on to say “Wonder, Courage and Active" have been chosen as the Swim and Survive program titles.

Wonder
A water familiarisation program for parents and their children aged 6 to 36 months.

Courage
A program that builds water confidence for preschool aged children between the ages of 3-5 years.

Active
A swimming and water safety program for school aged children between the ages of 5-14 years”.

Glenn is hoping that Bingara people have a great season at the pool, and is looking forward to “seeing lots of patrons making the most of the Bingara pool”.