Local man, Graham Cutmore, will start group fitness classes in Bingara later this month. Physical fitness is something Graham has always been keen on, and he has identified a gap in fitness instruction in the district which he is keen to address.

“Without (former instructors) Elise McLennan and Kyra Beasley, there is a call for it, and I know that people want classes,” Graham said. Working with Gwydir Shire Council’s Circular Economy Project Manager, Duncan Thain, Graham will be using the Fitness Centre for his classes.

“It is good that we have a facility down there that we can use, and people need to use it otherwise it won’t be there,” he said.

“Duncan has been very supportive, and is keen to see this get up and running,”

Graham has finished his Certificate III in fitness, which enables him to conduct group classes and work as a gym instructor. He is currently half way through Certificate IV, which will allow him to do personal training, which is one-on-one sessions.

“I am hoping to finish that by the end of December,” Graham said. Graham’s classes are designed to cater for all ages, from 16 to the quite elderly.

“It is for all abilities, it is a circuit based program, so you just go at your own pace,” Graham said. In the future, Graham plans to do further study so he can work with rehabilitation patients.

There is a pre-program screen, and if there are any underlying issues, participant swill need to see their doctor so they don’t injure themselves.

Graham hopes to work closely with the doctors at the Medical Centre to help with patients’ fitness levels.

Classes will be held at the Gwydir Fitness Centre, Bingara, on Mondays from 5.15 to 6.15pm, and on Wednesday and Friday mornings from 6.30am to 7.30am, and Thursday afternoons at Cunningham Park from 5.15 pm to 6.15pm. 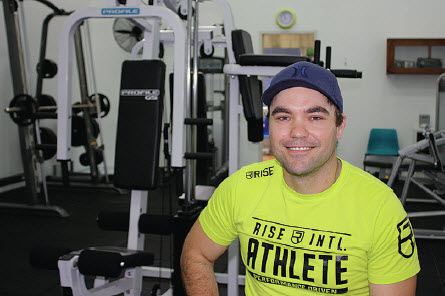 In the future, if demand exists, Graham may expand his business to also work from Warialda. “Not at this stage, though,” he said.

“I have a full-time position at the Imperial Hotel, so I don’t have the time, maybe later on down the track, but at this stage, it will be just here. “If the business increases and the need grows, the business will also grow.

“If we get fit, we can live longer, and live more productive lives,” Graham said.