Great prizes on offer at Easterfish

The region’s keen anglers will find favourite spots at Copeton Dam, the Gwydir River to the junction of the Horton River and also the Horton River over Easter to take part in the annual Bingara Easterfish competition.

Bingara Anglers Club President, Stuart Lanagan, told The Gwydir News that fish are “apparently” biting. Stuart has been told fish measuring about 58cm have been caught in a hole upstream from the gravel screen. “They are a bit timid though, because there isn’t a lot of water.”

For the past couple of years, the competition has been ‘catch and release’. The competition runs from Good Friday, April 19 and runs until 3.00pm on Easter Sunday. The competition is open to men, ladies, boys and girls, and anglers can register from 8am to 4.pm on Friday and Saturday. No registrations will be accepted on Sunday.

Categories include: longest cod, longest yellow belly, longest catfish, heaviest European carp, most European carp, secret weight carp and a mystery prize. Native carp are not accepted, and all carp must be weighed in at the hatchery.

One lucky entrant will win a kayak and accessories valued at $1000, donated by the Office of Environment and Heritage. The winner must be present at the hatchery on Sunday to claim this prize.

The Northern Slopes Landcare Association is funding all the carp prizes. A kayak will be presented to the winner in the Secret Weight Carp competition.

All profits from Easterfish go towards the Bingara Anglers Club Murray Cod Hatchery river restocking program. The committee enjoys wide community support, including strong support from Pallamallawa anglers who help with recording catches over the weekend. 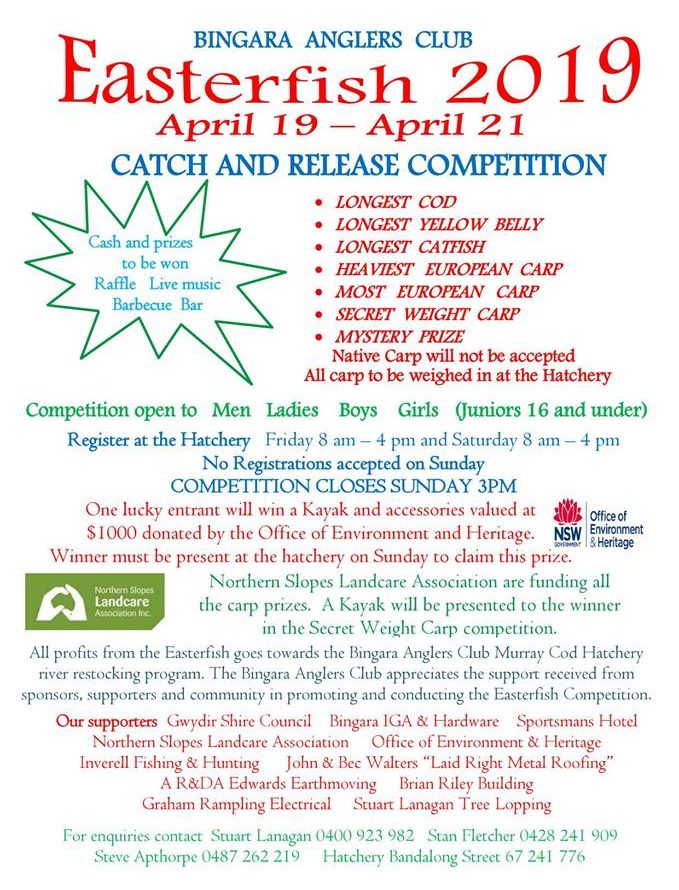