In 2017 Gwydir Ark, in association with Northern Slopes Landcare, applied for a Natural Resource Management grant under the categories of improving threatened species habitat and revegetation activities.  The project was to plant trees and tall shrubs to provide food to koala carers in the area.

The area to be planted was on The Living Classroom in Bingara and was a 2.5ha site between a Bush Tucker garden and a Biolinks planting. The project was also designed to look at what species do well in this area with particular attention to trees from further west which may counter the effects of climate change. 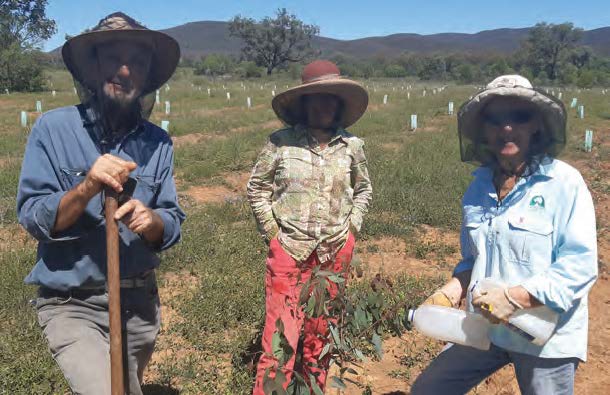 Gwydir Ark’s application was approved but it turned out to be a fairly bad time to be trying to plant trees. Looking back on it the trees should probably have been planted immediately as the weather went from bad to worse. Nearly 900 tubestock trees, carefully selected for their suitability as koala food sat around getting more and more pot-bound as the weather got drier and drier.

Eventually after a 20mm shower of rain in September 2018, in desperation the trees were planted by volunteer members of Gwydir Ark. Volunteers watered them as often as possible but by the start of 2020 had only managed to keep about half of the original ones alive.

Then this year we finally had some rain in Bingara so Gwydir Ark started replanting based on some trees which had been left over from the original planting and had been cared for in the Living Classroom nursery. Also in that nursery were a number of trees grown from seed which were suitable koala food trees. These also had reached the point where they should go into the ground so again Gwydir Ark volunteers started replanting where the original trees had not survived. So far there have been three planting days and 228 trees replanted. About two thirds of the original 2.5ha have been replanted.

Gwydir Ark members all have their fingers crossed for the showers forecast for the coming week but even if they do not eventuate, watering should still be possible while maintaining the recommended physical distancing rules for Coronavirus. Meanwhile the koala released on the Living Classroom before Christmas has been sighted a number of times so soon he may have a much larger selection of leaves on his menu.