The Gwydir Education & Business awards, held at the Roxy Theatre on Thursday night, honoured business people and employees, as well as students from Bingara Central and Warialda High Schools.  Guest speaker, Jason Lewis, spoke about the development of his niche business which he and his wife, Ann operate in the Bingara district.  The dinner was prepared by the Bingara Central School SRC and Hospitality students under the direction of Deputy Principal, Annet Mavin. 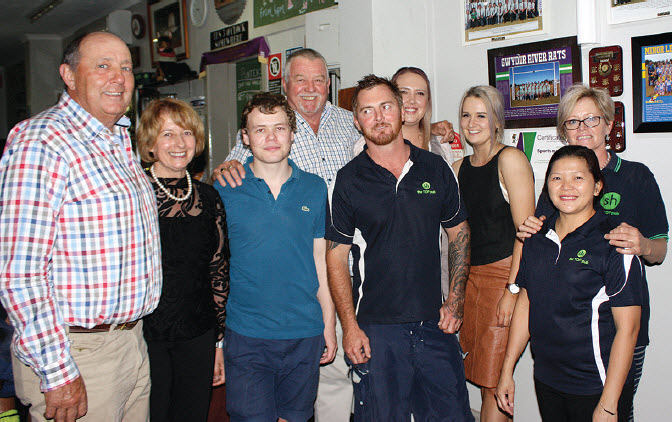 Announcing the winner, MC John Bishton said “David and Belinda have created a warm and welcoming family friendly environment that has become a hub of the community.  The pub is vibrant hosting lots of different functions and events such as regular live music, discos, Melbourne Cup and Christmas functions as well as supporting a range of community, charity and sporting events.

The bistro has become known for its affordable, tasty and wholesome food and the beer garden is a relaxing welcoming space. The staff are all friendly and it really is the pub where everyone knows your name”.

Publican, David Barnes, told the crowd he and Belinda, who have owned the hotel for only about two years, are both impressed at how community minded Bingara is.

“Different sections of the community get behind projects,” he said.

“Any business is only as good as its staff, and we have absolutely fantastic staff who go above and beyond the call of duty. Every day at the Sportsman’s it’s a work day, but it’s a fun day, everyone has some fun. We have some great loyal customers, thank you very much for this nomination and this award”.

The award for the Small Business went to the Warialda Golf and Bowling Club.  The Club was chosen from 14 nominations.

“There were many deserving recipients in this category however the judges were moved by the nomination for such an important community establishment, MC John Bishton said.

“The Club was in a very dire situation about 18 months ago and were close to closing its door, but with the help of a small group of dedicated volunteers and staff the club has managed to pull through, and go from strength to strength.  The Warialda Golf and Bowling Club is a small business that is a vital asset to our community and beyond and is a very worthy and deserving nomination. The Club is largely run by volunteers, and their passion and commitment to please the customer is evident.”