Gwydir League ready to kick off

Gwydir League kicks off its Group 19 campaign on Friday, February 1 with a 6.30 pm training run at Gwydir Oval, Bingara.

The new Rugby League Club is the result of the Bingara Bullets and the Warialda Wombats deciding that a joint effort provides the best prospects for the two small towns.

By joining up, they will increase the playing numbers, attract more sponsors and probably treble their past attendances. Major sponsors in Bingara are the Imperial Hotel (seniors) and Bingara RSL (18s and girls). The first step has been completed with the signing of a very strong coaching team that has a track record of premierships and that knows exactly what is required to be successful at the top level. 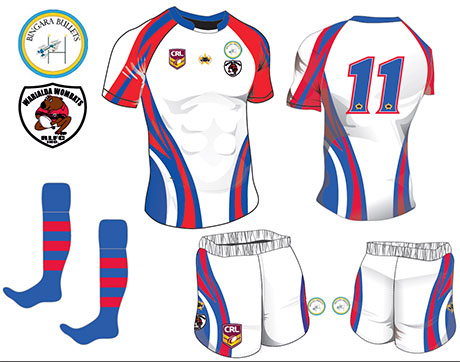 What the Gwydir Rugby League players will wear when they take to the field this year.

The coaches are: Peter Stevens (firsts), Mick Wade (reserves), Stuart Dixon and Matt Cleal (under 18 years) and Wayne Ford (ladies league tag). The Club requires a Bingara based assistant coach for Ford. Stevens and Wade will do a lot of work together to ensure all senior players have a chance at the top grade.

Once the coaching team was in place, the next priority was to sign at least seven established first graders to compliment the players from 2012. The long-term success of the Club is reliant on an impressive first season and this seems assured in view of the calibre of players signed. They include; Mitchell Porter, Darrin MacGregor, Luke Fenton, Harold Duncan (Hawks), Todd Simpson and Ashley Churchland (Moree Boars).

Also, the re-signing of Matt Clea l is a real plus. Cleal was a member of the Hawks 2011 premiership side before returning to Warialda in 2012. In fact many of the signings are Warialda players that had to move away to play first grade and have returned without hesitation.

It is expected that further players will transfer in once the season starts to help the club meet its player targets of 50 seniors, 20 under 18s and 20 ladies league.

In addition to the new players, the Bullets and Wombats have some great players to contribute to the squads. While it would not be right to single anyone out, many will play first grade, if not immediately, certainly after they achieve the increased level of fitness. The first match is likely to be in March when a pre-season competition will kick off the Group 19 season.

The Bingara and Warialda Clubs are seeking expressions of interest from individuals and businesses as sponsorship packages are currently being developed. The objective is to have a package that will suit everyone, from the pensioner who would like to make a small donation to get league going, up to those that wish to make a serious contribution.

To express an interest, simply email the Club Secretaries: