BingaraLatest NewsSportsGwydir proves to be a force to be reckoned with

Gwydir proves to be a force to be reckoned with

In a remarkable display of rugby league, Gwydir won all three games to finish on top of Saturday’s Group 19 first grade launch at Glen Innes.  Those closest to the Club expected a solid display, but no one dared suggest that a grand final berth was possible, let alone a win against the might of the Moree Boomerangs. 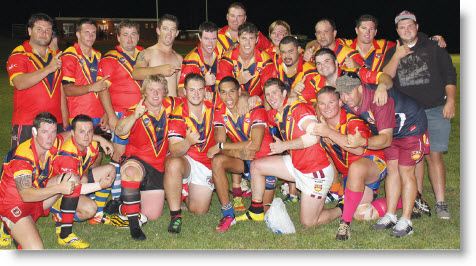 But winning was the order of the day, kicking off at 1pm with a four tries to one (16-4) victory over Ashford. Scorers were Kyle Miller (2), Jay Fletcher and Mick Hancock.

Next was a 6 pm clash against Inverell that was expected to be much tougher.  However Gwydir had come to play and led 12-0 at the break and went on to win 16-4. Scorers were Ashley Churchland, Brendan Crichlow, Harold Duncan and Adam Rodilossi.

While Gwydir was going about their business, their grand final opponents defeated Tingha 16-4 with a lot of reserves playing and then they brought out the stars to hammer a quality Armidale side 40-8 in an awesome display of power and running.

The grand final kicked off at 8 pm and was judged by all as the game of the day.

Gwydir’s forwards were brutal as they hammered up the centre in both attack and defence, not letting the opposition settle into their game. The tactics paid off with tries to Mitch Porter and a beauty out wide to Andrew Wynne, for an 8-0 lead at the break. A totally frustrated Moree team, was struggling for composure against a charged up Gwydir combination.

However after half time the Boomerngs flew out of the blocks and quickly ran in two tries to make it 8 all with 17 minutes on the clock. When one looks back on the 2013 season, the pure guts of the Gwydir team during the run down to clock will be a highlight. The team came of age during this time, never forgetting the game plan as they settled back into the hard hitting defence that is the only way to beat the Moree boys. The game ended at 8 all with Moree defending on their line as another try to Gwydir was likely. Gwydir the first scorers, were awarded the match against the hot favourites.

Every one of the thirty odd players contributed to the success, many had played their hearts out in the earlier games, some unable to back up, others carrying injuries but sitting on the bench to help out if necessary. This was truly a great effort whole of Club effort, especially by the forwards, but the backs played a significant part and showed that Gwydir can also attack from any part of the field.

The weekend was capped off by the ladies league tag team that won both their matches at Inverell on Sunday. In the first game against Tingha, Tara Butler and Kiarne Churchland scored for an 8-4 victory. In the second game against Moree, both scored again, along with Melissa Molley for a 12-8 win.

Inverell Next
Gwydir commences the competition on Saturday 6th April against Inverell in at least three grades. (1sts, Reserves and Ladies League Tag). At the time of writing a decision has not been made regarding whether the clash will be at Bingara or Warialda.

About 6 players are still needed to make up an under 18s squad and the Club has been given until the end of April to arrange this. Both towns have the players to be a real force, but for reasons unknown to the Club, it is proving difficult to get a squad of twenty together.