Cars, windows and solar panels bore the brunt of a fierce storm which hit Bingara on Saturday night.

The storm, which hit at about 9.30 pm brought with it hail stones as big as golf balls, with some the size of tennis balls. To add to the damage, the hail was jagged. 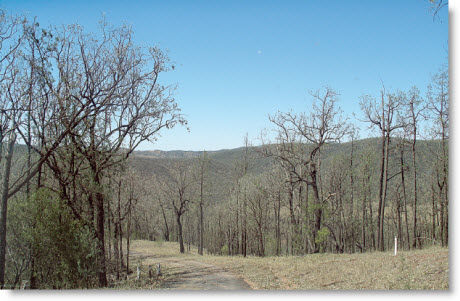 The road to Batterham Lookout looks like a bushfire has gone through, leaving the trees
almost bare. Leaves and pine needles coat the ground all the way up to the lookout.

A man staying at the Imperial Hotel-Motel who left his motel unit to observe the storm, reported a chunk of ice, ‘roughly half the size of a four litre ice cream container’ landed directly in front of him.

A local man who braved the hail to try and move his car, received minor injuries when he was stuck on the head by a large hail stone.

Residents described the noise of the storm in different ways, including “deafening, and very frightening”, while others said the sound of the approaching storm sounded like an earthquake was coming, or a huge mob of horses.

Others said that anyone who was outside could not believe the ‘roar’ of the approaching storm.

“Most of the public buildings owned by the council suffered broken windows, mainly on the northern side, which is the direction the storm came from,” Mr. Eastcott said.

At the time the storm stuck, Mr. Eastcott was driving between Gravesend and Warialda.  “It was like driving into a curtain of water, followed by hail,” he said.
“Visibility was quite poor, and in Bingara, the hail stones were bigger than what I experienced.

The only major Council owned building to survive unscathed was the Medical Centre. The rest of the buildings had substantial damage to windows, again on the northern side, but no structural damage.

The council office’s lights were not working on Monday morning, indicating that water had entered the ceiling.

Touriandi suffered some damage to windows and skylights, but no-one was injured.
The SES were busy with call-outs to a number of homes.

Erik and Noelene Ozols at The Imperial Hotel lost the roof of a shed behind the hotel, and suffered hail damage to two cars, as well as broken north facing windows.

Many houses in town suffered broken windows, and roof damage, and houses with solar panels on the roof suffered damage to the panels.

The most dramatic damage can be seen on the hills east of town. The storm cut a swathe over the hills leaving Batterham Lookout and the hill to the north looking like a bushfire had passed through.

The mostly iron bark and cypress pine trees had lost most of their canopy of leaves.
“On the hill line to the east of Bingara, you just have these sticks sitting up on the top of the mountain,” Max Eastcott commented.

Some damage also occurred in gardens around town.
Clean-up after the storm began straight away.
“We have some great staff at Bingara and Warialda, and they were out and about covering all these windows on Sunday, and they did a great job,” Mr. Eastcott said.

The Advocate has also received reports of minor to major hail damage on properties outside the town area, the worst being at Don and Gay Mack’s property, Berrybank.
Their son, Jason’s property Mitiano, next door, escaped the storm.

The road to Batterham Lookout looks like a bushfire has gone through, leaving the trees almost bare. Leaves and pine needles coat the ground all the way up to the lookout.