A davastating storm wreaked havoc on Bingara and surrounds on Saturday afternoon.  Passing through Bngara around 5.30pm on Saturday, it reportedly produced hail stones the size of oranges in some places and caused widespread destruction.

Large hailstones pounded the region resulting in reports of smashed windows, injured animals, destroyed crops and roofs in need of replacing, particularly out the Elcombe road.

The Bingara Show felt the affects of the storm after the hail and heavy rain saw the cancellation of the majority of the evening entertainment planned for Saturday night.

Secretary of the Bingara Show Society, Robyn Phillips was still pleased with how the weekend proceeded.

“Competitors numbers were up this year,” said Robyn. “With over 200 competitors the ring events were very well supported and the showjumping arena was kept busy over both days culminating in a 6 Bar event on Sunday afternoon. 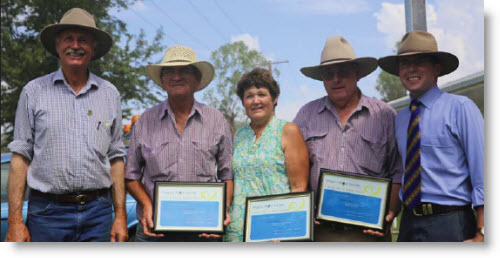 Opening the event was Member for Northern Tablelands, Adam Marshall who along with Show Society President, David Young, presented Robert and Debra Mack and Ron Greenaway with life memberships for their many years of continued support and service to the Bingara Show Society.

Families enjoyed some great entertainment on the Saturday, with the racing pigs proving very popular, along with rock climbing, magic shows and the petting zoo. The Pavilion was also well supported and items displayed well to the credit of the show pavilion committee.

While competitor numbers were up, support from the local community was not as pleasing, however those who did attend were very impressed by what the show had to offer.

A fireworks display on Saturday evening brought to a close mirroring in fine splendour what had been a dramatic afternoon.