F Troop are always a joy to watch at the Pony Camp, with riders and their helpers going through their paces. 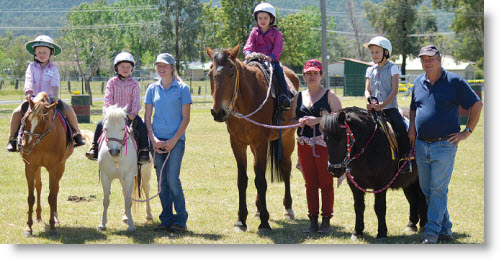 F Troop was again very strong in numbers, and by the end of the week, riders had gained a great deal of competence.

A good number of the F Troop members were accompanied by parents who themselves were members of the Pony club when they were children.

There were not as many older riders, but amongst them, some very good riders.  “Bingara Pony Club has some good riders for the future,” one Pony Club member commented.

The team to compete in the Zone 8 Jamboree was picked at the conclusion of the camp.

Jamboree is being held at Warialda on Thursday, Friday and Saturday.

Bingara photographer Julie Alley was very busy at pony camp and has kindly made available a number of photographs including the one above for reproduction in the Advocate.

There are more of Julies photos, and others supplied, on Page 5 of this week’s Bingara Advocate.