During the Royal Australian Historical Society 2009 State Conference in Armidale from October 31 to November 1, representatives from the Bingara Hospital History Group received a Heritage Grant Award.

The Group received a grant of $3,900.00 for the History of the Bingara Health Services 1889-2009, a project to research, collect, record and print a book about the history of the Bingara District Hospital from its beginnings in 1889 to its recent demolition and the replacement of a new Multi Purpose Service in 2008. 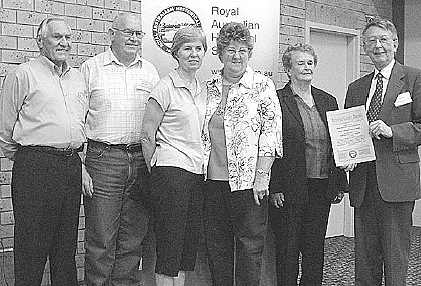 In November, 2006 the plans and building of a new Multi Purpose Service was under way and management wanted memorable events and history recorded and displayed in the new M.P.S. after the demolition of the old hospital.

The group has been responsible for collecting, restoring and framing photos of most of the Doctors, Matrons, Board members ,C.E.O ‘s and Staff Groups since the Health Service began in1889 and the pictures are placed on the corridor walls of the new MPS.  A very large digital canvas picture of the old Hospital just before it was demolished takes pride and place at the front entrance. This memorabilia was in place for the official opening and has met with very pleasing comments and holds a great interest to visitors and staff.

A lovely photo album was put together by one of the group members and the costs met a by a anonymous person who then donated it to the Health Service.

It was not until 2007 that discussion turned to producing a book on the history of the Hospital. Since then the group has put in an enormous amount of work researching and collecting relevant information.

Work on the book is progressing well and after gaining the grant it is anticipated that it will be printed in early 2010.  Members of the History Group have received very positive responses from people about the book including a number of advance orders.

The book will be an important document from a historical perspective as it records the history of medical services in a rural town from pre Federation to the Twenty-First Century (120 years). 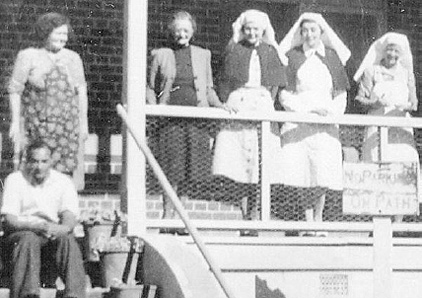 Danny Burns is the man sitting on the step, but who are the others?
The Bingara Hospital History Group is keen to know the identity of the people in this photograph, taken in the late 1940s or early 50s.