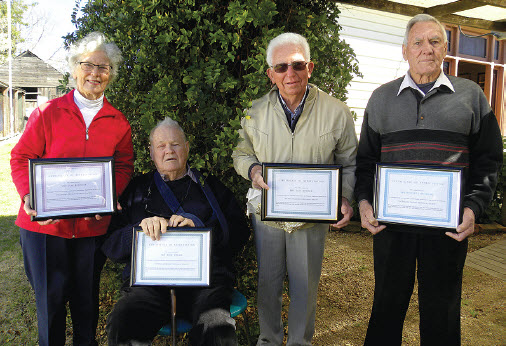 Other Patrons are Austin Mack and Joan Bull.

Ron’s interest in Military History led to the publication of several books about men and women from Bingara who served in war, pioneer families of Bingara, and the most recent, Women of Bingara.  He has also written many articles for the Historical Society newsletter.

Most recently, Ron has been successful in getting a couple of streets in new Canberra suburbs named after significant Bingara women, Vellacott Street, Denman Prospect, named after Helen Vellacott, and Munro Street, after CWA founder Grace Munro, of Keera, yet to be signposted.

Diana Kazanilli has been a member of the Historical Society since 1999, and is involved with the cataloguing of items in the Bingara museum. She has been involved with art exhibitions and a number of other projects.

Ted Sparke has been researching for the planned Heritage Walk, and during the last three years, has spent many hours at the Bingara Advocate, pouring through archives.  He is also involved with scanning and laminating photographs and putting captions to the photos.

“When we get our new building, this will be our photographic room, where copies of all our photographs, done by Ted, will be on display,” Society Secretary, Judi Peterson, said.

After the death of Bingara historian Bob Kirk, who compiled the original Bingara Cemetery book, Russell updated the book adding recent burials. He also has had plaques made and put on headstones.

The compilation of numerous historical Bingara books has taken much of Russells time.  He and Noelene Cronin compiled a book noting Bingara weddings, and with a team of Noelene Cronin, Judi Abra and present and former staff from the Hospital, produced a book about the history of the Bingara Hospital.

“All of our members do a lot of work behind the scenes,” Judi said.

“Without them we would fall apart,” President, Jane Connelly added.

“At the moment we have three volunteers who are cataloguing every item in the museum, so far they have done five rooms,” Judi said.  “Every item is given a number, information filled out on a form, photographed, and Jane enters the items on the computer.

“Ted, Russell and Jean have been sorting photographs and identifying them.”

Wednesdays are really busy at the museum.  “We have ten people who get on really well, everyone has a job and everybody does their bit,” Judi said.  “We have plans, everybody is happy, we have our own little niches.”

Have you been to the Bingara Museum Complex?  If not, you should, it really is fantastic and is well worth the visit, a MUST SEE on a visit to Bingara.

Locals, if you haven’t been, you should make the time, you will be glad you did.  Tireless work from these volunteers have created a historical reference point, that as a local, you would be proud of.