More than 350 red meat producers from the North West, the New England and Southern Queensland attended the Meat Profit Day, held at the Bingara Showground last Thursday. The day was organised by Double B Beef and MLA. 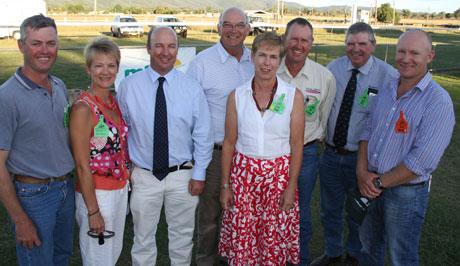 Chairman of the organising committee, Jennifer Capel, said that she was thrilled with the number of people who attended. “It’s not often we have the opportunity to hear so many high profile speakers, as well as industry leaders on the one day. The fact that it was in Bingara meant firstly, that it was on our doorstep, so many of us did not have to travel very far, but also that a number of the town’s organisations had the opportunity to benefit from the function.”

Friends of Touriandi catered for morning tea, lunch and afternoon tea, the Lion’s Club looked after the parking organisation, the Show Society manned the bar and the Imperial Hotel catered for the evening meal. The hotels and the motel also benefited from the number of people who stayed in town during the week.

Chairperson of Friends of Touriandi, Brenda Pankhurst said she was very pleased with the day, raising much needed funds for the Lodge. Five secondary students from Bingara Central School assisted the ladies with the catering. Mrs Pankhurst said that “they were just wonderful and they got better and better as the day went on.” She also said that the contributions of slices and cakes from the general community were  greatly appreciated.

The showground proved to be perfect for the function, with the main pavilion, the luncheon pavilion and the bullshed transformed into comfortable meeting rooms for the three “modules” which focused on different aspects of the day’s theme Healthy people, healthy soils, healthy business. Gwydir Shire Council staff were given special mention during the day for preparing the grounds so beautifully for the function.

A number of regional managers from MLA, who are usually overseas, were able to attend the day. They reported on the world markets for Australian red meat, explaining how the different advertising campaigns were working and to whom they are directed. MLA Managing Director, David Palmer, who was a founding member of Double B Beef when he owned a property on the Horton River, told the gathering that Australia runs 2.5% of the world’s cattle and yet it is the second largest exporter of beef behind Brazil, which it is expected to overtake in 2011. With regard to lamb, Australia now slaughters more lamb than NZ, even though at present, sheep numbers are the lowest they have been since Federation. According to Mr Palmer, Australia can feed 70 million people through its beef and lamb sales.

Mr Palmer emphasised that the industry needs strong leaders who will continue to look after red meat producers and the industry, while also stating that there is an urgent need for government to develop a food policy to safeguard productive land.

Related Articles:
Follow the link to read the Meat Profit Day 2011 articles which appeared in the Bingara Advocate prior to and after the event.