Is life as simple as Black and White!

The North West Theatre Company is planning its first major production for 2016. Noel Cowards ‘spooky’ comedy ‘Blithe Spirit’ will be performed at the Roxy Theatre , Bingara in May. 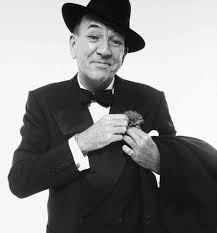 ‘Blithe Spirit’ will be the fourth play directed by Rick Hutton in the last few years. ‘Pygmalion’, ‘The Curious Savage’, ‘Gosforth’s Fete’ and ‘Murdered to Death’ were popular shows with both casts and audiences.

With ‘Blithe Spirit’, the NWTC is tackling one of the best loved plays of the 20th century.

‘Noel Coward was a prolific English writer of songs, musicals and plays through the middle years of last century,’ Rick Hutton said. ‘‘Blithe Spirit’ was written during the early phase of World War Two.’

Coward wanted to write a comedy play without any emotional sympathy for any of the characters, in keeping with the austerity of the times. ‘Blithe Spirit’ is the story of an established writer Charles Condomine, living in a village in Kent, England. Charles is seeking ideas for his next book. He invites a clairvoyant, new to the village, Madam Arcati to dinner, to discover some of her “tricks of the trade”.’

‘Charles lives with his second wife, Ruth. His first wife, Elvira, had died seven years earlier, of pneumonia.’ Rick explained. ‘Madam Arcati conducts a séance, and, quite by accident, the ghost of Elvira appears, and seems to be there to stay. From then on it is all downhill, as the play flits from one chaotic comic moment to the next,’ Rick said.

‘There are ten parts, three men and seven women, in our version of ‘Blithe Spirit’,’ Rick added. ‘Some parts are quite small, but all have wonderful dialogue and character roles.

‘I have decided to stage this play with a theme of black and white and set it during the 1960’s.’ he explained. ‘This “colour” theme fits in well with the “ghostly” aspects of ‘Blithe Spirit’ and also allows our make-up, costume and set designers some great scope to ‘play around with’.’ Rick said.

Auditions are open to all, and the rehearsal process will involve one or two afternoons or evenings each week through to opening night on May 7. There will be five performances in all, on the evenings of May 7 and 13 and matinees on May 8, 14 and 15,’ Rick concluded.

For more information about ‘Blithe Spirit’ and any other NWTC matters, contact the President, John Wearne on 0418 419 684, or Director Rick Hutton on 0428 255 380 for the reading and auditions for ‘Blithe Spirit’.