Murdered to Death ‘premiered’ in Bingara last weekend and has quickly been dubbed another highly successful NWTC production.

Following the Saturday performance, audience members from South West Rocks approached front of house to enquire if the play was going to the coast on its tour. They had thought it was a travelling professional production. 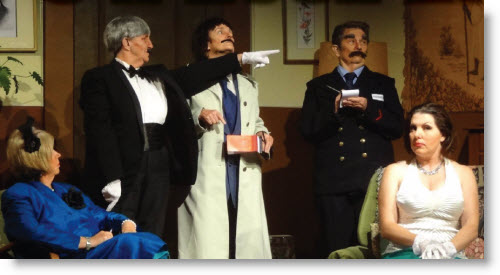 So how is it that a small amateur theatre company can produce such a high quality play?

It is obviously an asset to have experts in lighting, sound, makeup, hair, and costume. The stage itself adds an extra dimension with such attention to detail. The stage features an authentic wall hanging purchased in Egypt during WWI, working lamps, exquisite floral arrangements, antique phone and a fireplace complete with a fire. The hidden gem is the actual set construction.

It is sturdy, safe and has two fully functioning doors. This is particularly handy with Inspector Pratt fumbling and stumbling.

The Director has been able to form ten volunteers into a polished and skilled cast. Making their debut with the NWTC are Johnette Walker, Francis Bilsborough and Sally Olive. All are very natural and seemingly at ease on stage. The play is a spoof of an Agatha Christie style murder mystery.

The company has a great number of actresses and playing to this strength, decided to cast five females in the male roles. This decision is pure genius and the quirkiness lifts the play and greatly adds to the sense of fun and belly laughs.

If you enjoy a mystery and love to unravel plots and look for clues this is the play for you. The play opens on Mildred Bagshot and her niece Dorothy Foxton preparing to receive visitors at their extensive and rich estate. Mildred is excited and nervous.

She has every reason to be anxious as there are plots and schemes at foot to take advantage of her and her visitors.

Chris Fry as Constable Tomkins is a true delight. Nedine Young as the Colonel tops her previous character as the Vicar in Gosforth’s Fete, and Tahlia Stevens as Dorothy Foxton balances the intimidating French character played by Tanya Heaton. If you only go to the theatre ‘once a year’ and have already enjoyed Gosforth’s Fete, make an exception to go and see Murdered to Death.