Wagyu breeder Jason Lewis attributes much of his success to the use of Meat Standards Australia (MSA) grading, and believes temperament is key to consistently achieving outstanding compliance rates to the program’s specifications. 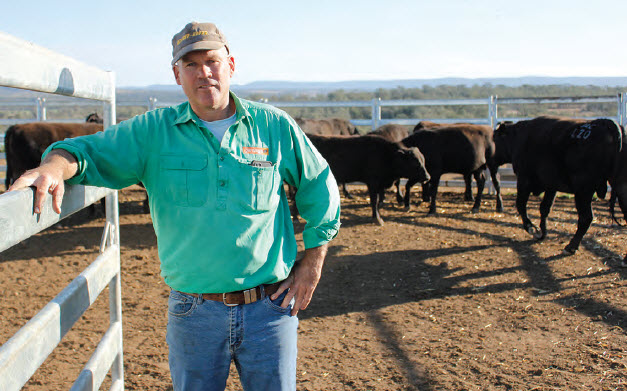 Jason Lewis, Jac Wagyu, Bingara, was awarded the Most Outstanding Beef Producer award for NSW at the 2017 MSA Excellence in Eating Quality Awards.

Jason and his wife Ann run Jac Wagyu as a vertically integrated operation in conjunction with Jason’s parents, John and Lynne from their 2000-hectare aggregation, with the home base at Clevecourt, Bingara.

At the 2017 MSA Excellence in Eating Quality Awards for NSW, presented at Tamworth last last month, Jac Wagyu was awarded the Most Outstanding Beef Producer award. This year’s award recognised any production system, with the exclusion of accredited grainfed beef, that achieved the highest combination of compliance to MSA requirements and eating quality performance as represented by the MSA Index.

The accolade comes a year after Jac Wagyu was named as one of the top three finalists in the inaugural MSA Excellence in Eating Quality Awards in 2016. Jac Wagyu beef is sold in 14 Coles stores in NSW, Victoria, Queensland and Western Australia, and the Lewis’s have successfully developed a premium line of Jac Wagyu Rendered Fat that is stocked in all Coles stores on the eastern seaboard.

Their breeder herd comprises 400 Angus breeders and 100 fullblood Wagyu females that are used to provide replacement bulls. Cattle are usually turned off at weights of 650-700kg plus. Jason Lewis said a major contributing factor to meat quality that has emerged from their past 10 years of MSA grading is temperament, and it has become a key selection criteria in the animals they keep.

“Wagyus were originally bred to work and they get around the paddocks a lot more than British breeds, so we’ve learned a lot about handling and educating the cattle throughout the growing period,” Mr Lewis said.

“Even when we’re transporting cattle to be processed, it’s important to not send them in extremes of heat or cold because of the potential stress that in turn affects the meat quality as well.”

Young cattle are yard-weaned for two weeks and started on supplementary feeding, and worked with Kelpie dogs to get them used to being handled with people and dogs. Once in the paddocks, they are visited once a week on motorbikes and by the dogs, while grazing sub-tropical grasses and a hay/grain supplement. Mr Lewis said 400 days later, they’re a big, calm animal, and kept on a rising plane of nutrition in increasingly smaller free range paddocks with access to supplementary feed.

He said he’s happy to keep learning about producing the perfect product, by constantly monitoring the MSA feedback. “In this field we are competing with some very large meat production companies, so we need to keep doing things better wherever we can,” Mr Lewis said.

“We’re dealing with a very high value animal and asking quite a large premium from customers for our product, so it’s important to aim for 100% compliance.”