The announcement on Tuesday of Jade Butler as Bingara’s Young Citizen of the Year was a popular choice with people attending the Australia Day celebrations at the Bingara Museum.

A good crowd was in attendance to take part in the celebrations which began with breakfast catered for by the Bingara Lions Club. 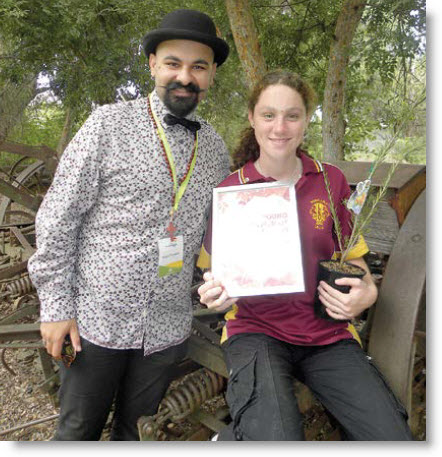 Jade has embraced service to the Bingara community by joining the Bingara Leo Club, and has been club Secretary for two years.

As a Leo member, Jade is heavily involved in raising funds for the community, through Leos and the Bingara Lions Club. She is regularly seen selling raffle tickets, manning the entry gates at the rugby, and helping at community events.

For two years running, Jade entered the Youth of the Year contest.

Due to circumstances beyond the Lions control, both functions were cancelled.

In 2015 Jade was a Bingara Orange Festival princess, raising money for the Gwydir Learning Region Country Education Fund, of which she is also an active member. Jade was crowned the Charity Queen for her efforts.

Jade is an inspiration to her fellow Leos, and is well regarded by all the Lions members. She is a great mentor to younger Leos and students at her school, and is highly regarded by all her teachers for her attention and scholastic abilities.

Jade also assisted Council staff with the Soundtrails project at information sessions, testing and at the launch, displaying qualities of being approachable, receptive and eager to see the project completed.

A pleasing number of young people attended the Australia Day breakfast, with Central School leaders taking part in the welcome to country and flag raising at the beginning of the formal proceedings.