Jenny Hawkins Citizen of the Year 2011

Jenny Hawkins was named as the Citizen of the Year Award recipient at the Australia Day ceremony, held last Wednesday week in the Historical Museum grounds in Maitland Street. 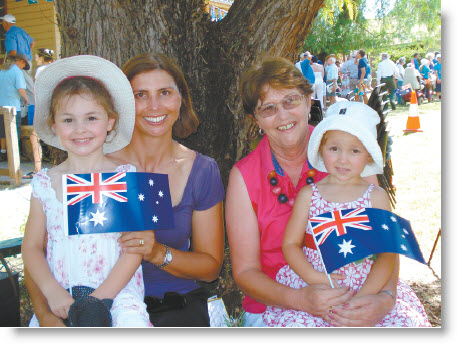 Bingara Citizen of the year Jenny Hawkins pictured with her daughter Alison and her two grandaughters, Alicia and Sidney Turner

Jenny came to the Bingara community seventeen years ago as manager of Home and Community Care (HACC), where she proved to be efficient and caring. Jenny retired from HACC two years ago, but she did not retire! She has maintained a keen interest in the community’s frail, aged and disabled citizens, as a volunteer with Meals on Wheels and as a personal carer for two residents without families, doing their  personal washing, ironing, shopping and looking after their business affairs.

Access for the disabled was recognised as a concern in the Gwydir Shire, with Jenny often seen with her Warialda counterparts identifying unsafe areas and reporting them to council to aid in future planning.  This takes many hours of Jenny’s own time.

Jenny’s interest in elderly people and the welfare of people in general, motivated her to nominate as a member of the Hunter/NewEngland Local Health Area Committee. She has been a member of that committee for many years and President for the past three years. This committee was closely involved in the construction of the Multi Purpose Service which is an asset to the whole community.

Bingara Community College (formerly Bingara Adult Learning Association) benefits from Jenny’s interst in education, especially for mature aged people, as she is an active member and has been Treasurer for  ten years.

Since leaving HACC, Jenny has involved herself with the operation of the Bingara Sporting Club, volunteering long hours of relief work, while also accepting the position of Treasurer and now Secretary of the club.

Jenny is a member of the Ladies Golf committee as the Past President of Bingara Ladies Golf. She also helps co-ordinate the October Veterans’ Week of golf and has been instrumental in organising the fortnightly veterans golf ar a local level.

In a change of direction, Jenny has become a member of the recently reformed Special Events Committee which will require her to volunteer even more time to the community.

Jenny shows a deep and abiding commitment to the Bingara community which was recognised at Bingara’s Australia Day Awards ceremony.

The crowd turned out in good numbers for the Australia Day formalities at the Museum. The seats were full and shade was at a premium. The Lions Club provided a wonderful breakfast of bacon and egg rolls along with tea and coffee.

The first award of the day was the presentation of Citizenship to Emma Smith. The crowd warmly welcomed her as a new member of the Australian community.

Masters of Ceremony, John Wearne and Deputy Mayor, Catherine Egan then addressed the gathering. They both made reference to the devastation that the floods in Queensland, NSW and Victoria have caused. Dorothea Mackellar’s poem was quoted with its references to a sunburnt country, sweeping plains and droughts and flooding rains. The words have never been more relevant than in the last few months’ turmoil caused by the weather.