John Wood returns to share his love of the Roxy

One of Australia’s best loved actors, John Wood, was the VIP in Bingara for a special screening recently at the town’s Roxy Theatre. 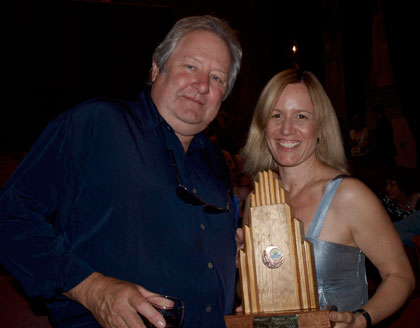 As Australian As, a 10-part series shown on pay TV’s Bio Channel, has featured Bingara and the Roxy Theatre and the soon-to-be restored Roxy Cafe, adjoining the theatre.

John Wood was one of 10 prominent Australians invited by the Bio Channel to tell the story, event, incident or experience that makes him appreciate what it means to be “as Australian as”.

He said “the human element” behind the building of the Roxy Cafe in 1936, by the three Greeks, the Peters, was what appealed to him.  “That’s it for me – the essence of humanity that surrounds the place,” John said.

“And Sandy McNaughton is such a champion of the building. It’s amazing the stuff she has sourced for the restoration project. I am looking forward to receiving my invitation to the opening.”

The actor first visited Bingara about five years ago on a national tour with fellow performers in The Club – and fell in love with the place. He’s since been back about four times.

One of Bingara’s distinguished senior citizens, Joan Bull, was at the opening of the Roxy Theatre back in 1936 – and “married the man I came to the theatre with that night”, she told viewers from the big Roxy screen.

Another Bingara local at the screening, Mervyn Hall, was just a gangly 18-year-old kid in 1960, working at the Roxy Cafe alongside the Greek owner, Jim Loulias and his family.

Another local in attendance, Bob Kirk, was saluted for his massive contribution to the project. He and wife Elva, who lived above the cafe for 24 years, “gifted” for a very nominal sum, the majority of original fittings and fixtures being used in the cafe restoration project.

John Wood said he felt the exposure given to Bingara on the Bio Channel would have an impact, although he wasn’t sure of the extent.

“It would be tremendous if the series was picked up by one of the commercial channels, or perhaps the ABC, so it could be shown to a wider audience,” he said.

Photos and story by Anna Rose