Kamahl and Bingara Central kids a hit at the Roxy

When the then US President Barack Obama visited Australia in 2011, devout fan, the Australian singer, Kamahl was very keen to meet him. He contacted his friend, Senator John Williams, who arranged for Kamahl to attend a dinner at Parliament House where the US President was guest of honour.

It was there that Kamahl met his hero. Afterwards, he said to Senator Williams, “How can I ever repay you?” “Do a concert at the Roxy Theatre in Bingara,” was Senator Williams’ prompt reply.

Both men kept their word, and on Saturday afternoon, the legendary singer Kamahl played to a packed Roxy Theatre. Kamahl asked that a local community group benefit from the concert, and Friends of Touriandi was chosen as beneficiary. 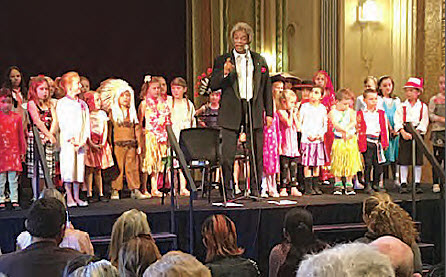 Primary teachers, Lindy Mill and Kathy Groth were asked to arrange for children to learn ‘One Hundred Children’ to sing with Kamahl. The children and the singer had only a short time to rehearse together, but the result was spectacular. They were sporting costumes from ‘all over the world’, many purchased by their parents.

The children had also learnt ‘It’s a Small World’, but it was, unfortunately, not included on the day. Perhaps there will be an opportunity for the children to perform later.

The show was a mixture of songs from throughout his long career, poems and stories, some funny, some thoughtful insights into his life’s journey.

Gwydir Council staff, Jenny Mead and Georgia Standerwick went way beyond their duty to make the show a success, and on the day, Scot Crispen assisted with the sound.

The show was a hit with the audience, and after the show, Kamahl met several people, posed for photographs and signed autographs. Kamahl then visited the Bingara MPS where he met a number of residents who were unable to attend his concert at the Roxy.