The annual Bingara Care 4 Kids junior charity camp draft and sporting was held on April 26 and 27 with great support from local businesses and volunteers.

There were 82 competitors for the weekend, travelling as far as St George, Dirranbandi in Queensland also as far as Tenterfield, Glen Innes, Walcha, Scone, Merriwa and Maitland plus some families travelling from the Mid North Coast, Bulahdelah and Gloucester and local surrounding areas.

All agreed that Bingara is a great little town and they are very proud to support this annual charity event and will endeavour to return next year. 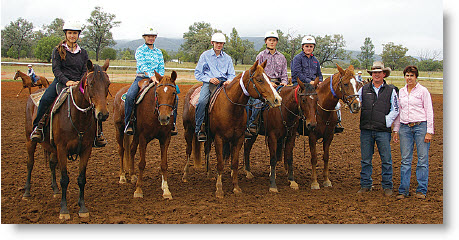 The 13 and Under 15 years line up with judge, Jarrod Hannaford and Sonia Coombes. Sam Cannington was placed third in this event.

There were also 26 local children competing on the weekend. Barnaby Munro qualified in the top four fastest times in the Under 8 years Flag race.  Tom Cannington, Jacqueline, Colless, Madeline and Nicole Coombes all qualified for their own age group Flag and Bend Finals. The top four fastest times from each age group of the Flags and Bends on Saturday afternoon were chosen and then ran off in heats to declare the winners of each age group.

There were some very fast and close races and with good prize money the pressure was on and our local kids handled it very well. 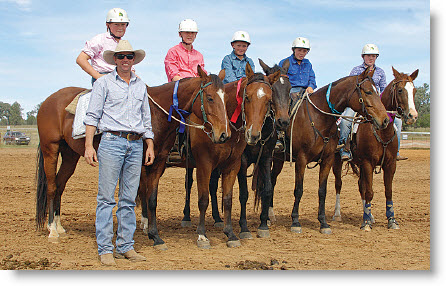 Judge Troy Clark with the 11 and Under 13s line up. Tom Cannington and Dylan McKinnon shared 2/3 place.

The Bingara kids also had success in the Campdraft arena, with 266 Campdraft runs for the whole weekend. Tom Cannington and Dylan McKinnon shared equal placing in their age group Campdraft on Saturday.

On Sunday after a shower of rain and a little delay with the safety of the Campdraft ground the Bingara kids did not disappoint with Sam Cannington, Jacqueline Coombes, Brooke and Dylan McKinnon placing in their age group drafts.

Sam Cannington, Dylan McKinnon, Jacqueline Coombes and Brooke McKinnon won the local competitors Campdraft highest aggregate score over the two days, all receiving $25 each for their efforts, this was sponsored by Lindy and Will Cannington.

We would also like to take the opportunity to thank Greg Johns for the use of his Gooseneck (our office) and for being on the mike alongside John Gill keeping both rings running smoothly.

Saturday night we held our annual two course meal, with all the produce and the beautiful homemade sweets from our local community thank you to all the people who kindly donated.

Also a big thank you to Marilyn and Bez Dixon without them no one would have enjoyed that beautiful meal and Jacqui Breneger for the homemade sweets. Around 130 guests enjoyed the two course meal.  A Big thank you also to Suzy Bilsborough and her children who ran the canteen – great coffee!

This event is a fund raiser for the “Bingara Care For Kids Charity” to help local families with sick children with the medical costs that Medicare or health insurance do not cover.

Through the generosity of so many people we will once again be able to make a significant donation to this very worthy cause.