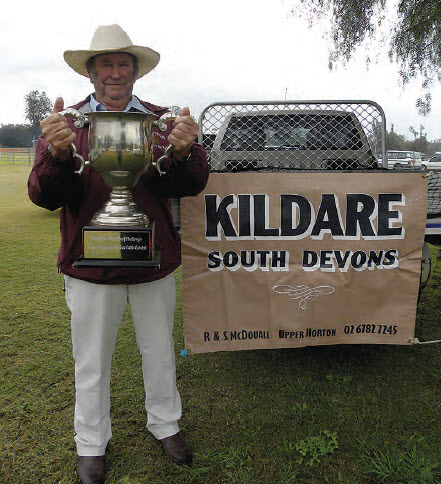 Farmfest is held at Kingsthorpe, between Toowoomba and Oakey, and has been running for over 70 years. It is basically the Queensland equivalent of AgQuip, with a lot of machinery, but with over 270 cattle on show, has a much bigger cattle show.

With strong competition, the Cattleman’s Cup has only come to New South Wales twice in 12 years.  Sassy won her sections and went on to win the best of the British breeds.

“She had more eye muscle than a lot of the bulls, even though she is only 420kg,” Rick said.  “She beat about 10 other breeds to be the interbreed cow, and then beat the bull to be Supreme Exhibit.”

Rick explained that South Devons have what is called fat lazy muscle.  “It is not big lumpy muscle, but flat muscle, a bit longer and thinner than others, so people don’t appreciate how muscular South Devons are,” he said.

“All the South Devons did well, they always do, but they are not really recognised in the ring for various reasons.  They don’t appreciate how much muscle they have.”

Last month, Rick travelled to South Africa to see the progeny of Kildare bulls who are doing well. An AI bull by Kildare Cadman was awarded South Devon Bull of the year in 2016 in South Africa.

“We went to a little field day, where we had to guess the bull with the biggest eye muscle area, and there was one there by Cadman, and he was the winner,” Rick said.  “We saw some other good calves by Cadman.”

Rick said that at Farmfest, people were taking notice of the breed, with people wanting to buy South Devon heifers and cows.