A fire which started in the Mt. Kaputar National Park last Monday continues to burn and had, on Tuesday morning, burnt about 4,000 hectares.  The fire was started by lightning strike, and while most of the country burnt is in the National Park, properties Cascades and Castletop have been burnt.

Although the fire burned close to the Cascades house, fire crews were able to put in a back burn around the house. At Castletop, the ridge behind one of the houses on the property burnt, but the house and other buildings were not damaged. 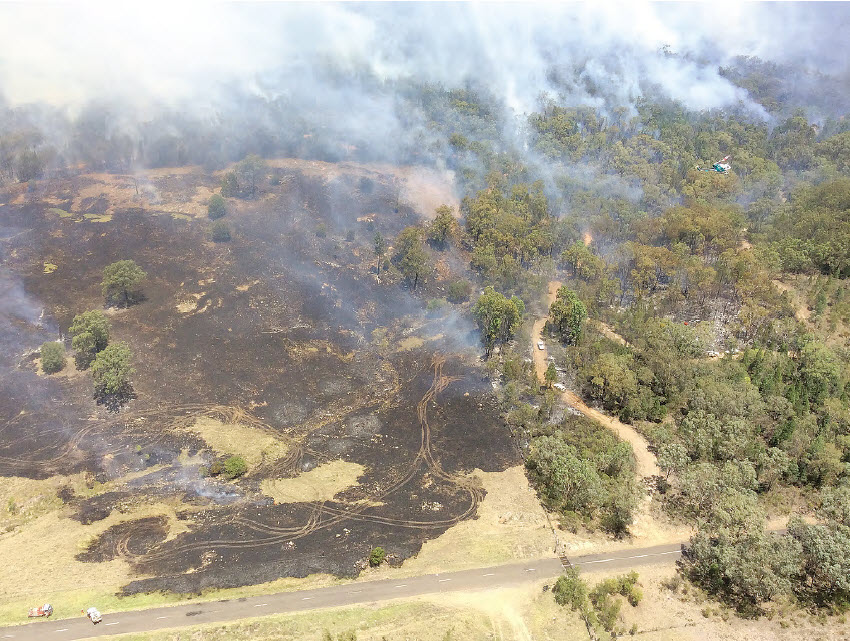 The Bobbiwaa Creek fire, with Killarney Gap road in the foreground. To the right of the picture is a helicopter, dropping water on the fire.

Acting District Manager, Deputy Incident controller/Operations, Scott Mack, said that fire crews put in a back burn around Killrney Gap.  “The fire did jump the road in one spot, but fire fighters were able to contain that spot-over,” Mr. Mack said.  “Local crews are continuing to follow the fire trail around the National Park on the western side and to the south,” he said.

“And on the eastern side, local crews, assisted by National Parks personnel completed a back burn around the edge of Castletop and Darthula, to where Darthula enters the forest country.  “National Parks will continue to burn along the fire trail to the Barraba track.”

Mr. Mack warned that because of the rough terrain, the fire will keep burning “for a while”.  “National Parks crews are conducting back burns and preparing the governor and Mt. Dowe for possible fire impact to infrastructure.”

The Mt. Kaputar National Park remains closed. The Killarney Gap Road was closed for some days, but at about 12.30pm on Tuesday, Gwydir Shire Council received notification from Narrabri Shire that the road has re-opened.

“The National Parks and Namoi/Gwydir team and the IMT thank the local crews and volunteers for their assistance in containing the fires on the Eastern side,” Mr. Mack said.