Bingara Central School Captain, Kristen Heal was presented with a Minister’s Award for Excellence in Student Achievement at a function in Sydney on Monday. 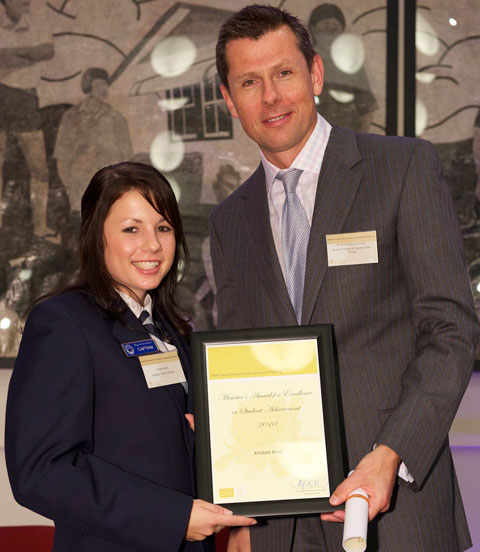 Kristen Heal with Michael Coutts-Trotter, Director-General of Education and Training, in Sydney on Monday.

The award was presented by the NSW Director-General of Education and Training, Michael Coutts-Trotter.

Of the 39 NSW secondary public school students to receive the award, Kristen and a student from Molong were the only recipients from Central Schools.

“Kristen is an exceptional young person. She is School Captain of Bingara Central School and a high achieving academic student,” her citation read.

“She is also Bingara’s Young Citizen of the Year. Kristen epitomizes everything admirable about public education. Her values and achievements have enabled her to move seamlessly from local to regional to state settings and, more recently to Parliament House, Canberra as a National Finalist in the ABC Radio’s Heywire Competition.

“Kristen is a high academic achiever, a talented Vocational Education and Training student (Gwydir Learning Region’s Vocational Student of the Year 2009) and an outstanding student leader. She has consistently and enthusiastically lived the values of public education throughout her school career.”

“These terrific young people are an inspiration to their peers and are a credit to their parents, their schools, their teachers and their community.

“NSW public schools are cultivating the next generation of leaders. We are helping young people grow into compassionate and thoughtful members of our society.

“Many of this year’s recipients are student leaders and community volunteers; they take time to help others in need, while also remain committed to their education and personal goals.

“They embody the core qualities that are taught in our NSW public schools – respect and responsibility.

“I congratulate today’s recipients and wish them the best of luck, in the Higher School Certificate examinations” the Minister said.

Up to 40 awards may be presented across the State every year by the Minister for Education and Training, which is open to Year 12 students enrolled in NSW public schools.

Students are nominated on the basis of achievement throughout their high school years, with particular recognition of excellence in Years 11 and 12.