People who attended the recent Meat Profit Day in Bingara  heard that there are many physiological benefits to laughter. 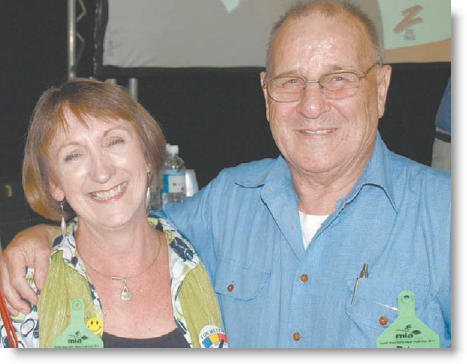 Babies start to laugh at around six weeks for a very important reason. That is when they need to kick start their own immune system. She encouraged her audience to laugh and demonstrated how everyone’s body reacts to laughter.

Clinical research shows that laughter has a positive effect on physical, psychological and social health and wellbeing.

Plenty of studies have shown that laughter can combat many common ills. For instance, research suggests that laughter may lower blood pressure and release endorphins.

Laughter also provides the body with a gentle but effective workout.  A good belly laugh exercises the diaphragm, contracts the ‘abs’ and even works out the shoulders, leaving muscles more relaxed afterward. It even provides a good workout for the heart.

Laughter also activates the Immune System. Doctors Lee Birk and Stanley Tan of Loma Linda University in California have studied the benefits of laughter as it relates to the human immune system.

The following is a summary of their research, taken from an interview published in the September/October 1996 issue of the Humour and Health Journal.

“In Berk’s study, the physiological response produced by belly laughter was opposite of what is seen in classical stress, supporting the conclusion that mirthful laughter is a eustress state, a state that produces healthy or positive emotions.

Research results indicate that, after exposure to humour, there is a general increase in activity within the immune system, including an increase in the number and activity level of natural killer cells that attack viral infected cells and some types of cancer and tumour cells; an increase in activated T cells (T lymphocytes). There are many T cells that await activation. Laughter appears to tell the immune system to “turn it up a notch.”
An increase in the antibody IgA (immunoglobulin A), which fights upper respiratory tract insults and infections.
An increase in gamma interferon, which tells various components of the immune system to “turn on.”
An increase in IgB, the immunoglobulin produced in the greatest quantity in body, as well as an increase in Complement 3, which helps antibodies to pierce dysfunctional or infected cells. The increase in both substances was not only present while subjects watched a humour video; there also was a lingering effect that continued to show increased levels the next day.’
Laughter helps blood vessels function better. Studies conducted at the University of Maryland Medical Centre, have shown for the first time that laughter is linked to healthy function of blood vessels. Laughter appears to cause the tissue that forms the inner lining of blood vessels, the endothelium, to dilate or expand in order to increase blood flow.
When the group of study volunteers was shown a movie that produced mental stress, their blood vessel lining developed a potentially unhealthy response called vasoconstriction, reducing blood flow.

The finding confirms previous studies, which suggested there was a link between mental stress and the narrowing of blood vessels.

The results of the study, conducted at the University of Maryland Medical Centre, were presented at the Scientific Session of the American College of Cardiology on March 7, 2005, in Orlando, Florida.

Laughter may also help the body process blood sugar, according to researchers led by Dr Keiko Hayashi of the University of Tsukuba in Japan. A study of type 2 diabetes – the most common form of the disease – found that laughter was linked to lower blood sugar levels after a meal.

Over two days, participants were given identical meals. On one day, they watched a humourless lecture, and the next they watched a comedy show. The group, some with and some without diabetes, had their blood sugar monitored during the study.
Afterward both diabetics and non-diabetics alike had lower blood glucose (sugar) levels after laughing through the comedy show than they did when they listened to the monotonous lecture.

Dr Hayashi says that he cannot yet explain the laughter-glucose connection. “If positive emotion such as laughter reduced blood glucose, both patients and medical providers would recognise the importance of it, and it would improve their mental health and quality of life,” Dr Hayashi said. “We should laugh more,” he added.

While we may not all be interested in the proven effects laughter has on our body and mind we all know that it makes us feel good, and sometime the feel good feeling is all we need to help us get through our day.