Few people get the chance to perform on the live stage. Fewer still get to play a lead role that suits them to a tee. In the case of Lee Loudon the opportunity has come about not once but twice in her acting career. Lee has the focal role of Mrs Ethel P Savage in the North West Theatre Company’s July production of John Patrick’s hilarious comedy play, “The Curious Savage”. 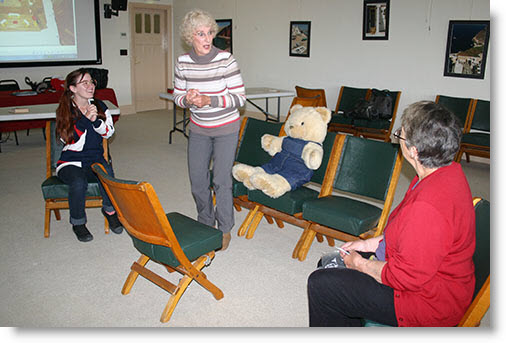 Lee now lives in Bingara but while living in Newcastle she played the same role and was awarded the female performance of the year from among a talented array of Novocastrian thespians. What’s more, she has had the chance to play Mrs Savage as both an American and as an Australian.

In Newcastle the production was presented as per Patrick’s original text and was set in Boston, during the 1950’s. The NWTC has adapted the play and set it in Canberra in the 1970’s. In both cases the setting is a sanatorium called “The Cloisters”.

“This is an endearing comedy,” said the NWTC Director, Rick Hutton. “The story-line, of a wealthy widow placed into the sanatorium by her greedy step children so as to prevent her from “selling off” the family fortune, questions the distinctions between sanity and normality, love and friendship, fantasy and reality,” he said. “It is just as meaningful today as it would have been during the 50’s or the 70’s.”

“Lee is a marvelous actor,” Rick added. “She was wonderful as Mrs Higgins in the NWTC’s 2013 production of Pygmalion, and she will continue to charm and delight our audiences as Mrs Savage,” he said.

“The Curious Savage” will be performed at The Roxy Theatre, Bingara at 7:30pm on the Saturday evenings of July 12 and 19, and as Matinees at 2:30pm on Sunday’s July 13 and 20.  Bookings for The Roxy can be made by phoning the Roxy Visitor Information Centre on 6724 0066 or on-line though www.roxybingara.com.au.