Hunter New England Health is urging the local community to take precautions against leptospirosis, following an increase in rats and mice due to the wet weather.

Hunter New England Public Health Physician, Dr David Durrheim, said leptospirosis is a disease spread from animals to humans, caused by bacteria found in infected animal urine and tissues.
“While leptospirosis is a relatively rare condition in Australia, most cases are reported from rural and regional areas, often because of mouse plagues,” Dr Durrheim said.

“Outbreaks of the disease usually occur following exposure to water, soil and mud that has been contaminated with infected animal urine, especially rodent urine. The bacteria can enter the body through skin cuts or abrasions, the lining of the mouth, nose, and eyes – and in rare cases through contaminated food and water.”

Symptoms typically develop five to 14 days following infection and can include fever, severe headache, sore muscles, chills, vomiting and red eyes. Diagnosis can be difficult as symptoms can mimic other diseases such as influenza. Often, people with leptospirosis do not develop all the symptoms.

“Some people may require hospitalisation if they experience kidney failure, jaundice, haemorrhaging of the skin and mucous membranes, meningitis or bleeding in the lungs,” Dr Durrheim said.

People with certain occupations are at increased risk of contracting the disease, including farmers, veterinarians and abattoir workers. There is also a higher risk for those who enjoy outdoor recreational activities such as camping, gardening, bushwalking and water sports. 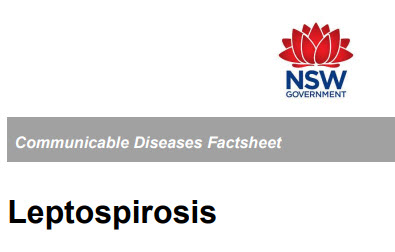 Infection can be avoided by:
• Washing hands with soap
• Covering cuts and abrasions with waterproof dressings
• Wearing footwear outdoors, especially when walking in mud or moist soil and wearing gloves when gardening
• Cleaning up rubbish and removing waste close to housing
• Avoiding contact with water (including floodwaters) where there is a possibility of contamination with animal urine.Leptospirosis is commonly treated with antibiotics such as doxycycline or penicillin, which is often most effective if started early in the disease.

NSW Health is also urging people to take care when applying rodenticides. Before using any bait, it’s vital that householders check that their product is suitable for domestic use, by reading product labels carefully. Agricultural rodenticides can be highly toxic and cause poisoning when used incorrectly.